RAB does not fire unless forced to: outgoing DG 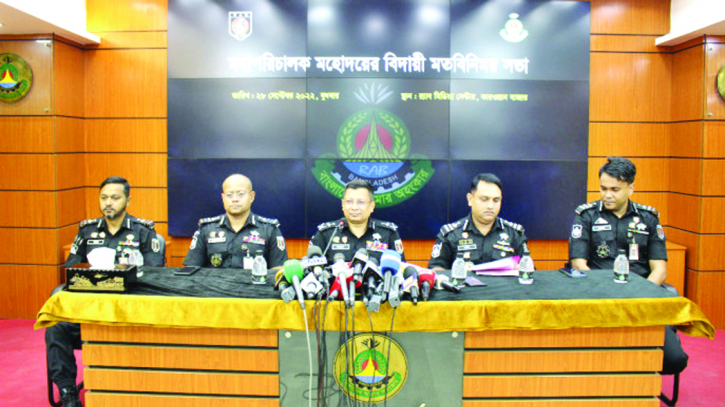 "As an elite force, we always have to work through challenging situations," said the outgoing director general of Rapid Action Battalion (RAB), Chowdhury Abdullah Al Mamun
The outgoing director general (DG) of Rapid Action Battalion (RAB), Chowdhury Abdullah Al Mamun said that the members of the elite force do not shoot unless the situation forces them to do so.
"We take measures according to the situation. It never happens that someone pushes us and we shoot. Every member of RAB is regularly trained in these matters," Chowdhury Abdullah Al Mamun said during an exchange meeting with journalists organised at RAB Media Center in the capital on Wednesday.
The exchange meeting was organised ahead of Chowdhury Abdullah Al Mamun joining as the Inspector General of Police (IGP) following his promotion after serving as RAB DG for more than two years. He will take charge as the new IGP on 30 September.
In response to a question whether the number of deaths in gunfights or crossfires by RAB has decreased due to the US sanctions, he said, "We use force only when necessary. We do not use force where it is not necessary."
"RAB uses whatever force is necessary to control the situation, in accordance with the law. When we are attacked, we have to fight back. Criminals attack us to avoid being caught. Then RAB members are forced to take measures according to their training. As an elite force, we always have to work through challenging situations," he added.
"It is not the case that only criminals are injured or killed. Many RAB members have been injured and killed. Many are disabled and unable to work. Moreover, if any such incident occurs, the incident is investigated according to the prevailing laws of the country," he further said.
When asked if it was difficult serving as RAB DG due to the US sanctions, he said:  "When we are attacked, when drug, arms, human traffickers attack us, we take measures according to the law. We do not cross the limit given to RAB by the law."
The outgoing RAB DG said that the elite force has arrested around 36,000 drug dealers in two and a half years.
RAB has arrested about 36 thousand drug dealers during in the last two and a half years and drugs worth about Tk2 thousand 300 crore have been seized, he added.
"RAB has started a war against drugs. But drugs are increasing and drug addiction is also increasing. The war we are fighting against drugs is a global war, this war is not only us, but is going on all over the world,"  Chowdhury Abdullah Al Mamun said, further adding: "Following Prime Minister Sheikh Hasina's zero-tolerance policy against drugs, raids have been conducted wherever drugs are found. Not only RAB but all law enforcement forces are working. Drug issue needs awareness from everyone. Parents should keep an eye on where their child is going."
"During the election period, the law enforcement forces work completely under the direction of the Election Commission. Various complaints are made. If there is a specific complaint against a specific person, let us know and we will take action," he said When regarding the allegations of police being used for political purposes during the elections.
He further said: "I think, in the light of the experience that we have been able to maintain law and order in the past, we are determined to do so in the future."