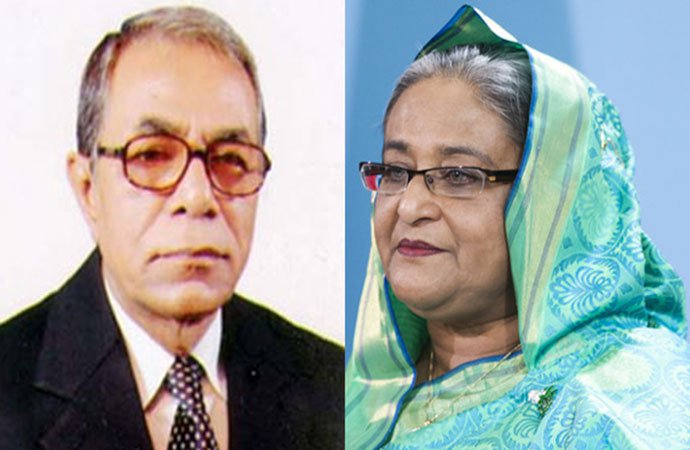 President M Abdul Hamid and Prime Minister Sheikh Hasina on Friday paid rich tributes to the victims of the August 21 grenade attack in 2004 and prayed for eternal peace of the departed souls of the martyrs.

In separate messages on the eve of the 17th anniversary of the heinous grenade attack, they urged all to come forward being imbued with the spirit of Liberation War to turn the sorrows of August 21 into strength for building a peaceful and democratic Bangladesh which will be free from terrorism and militancy.

"August 21 grenade attack in 2004 is a mournful day as the killers launched the history`s barbaric grenade attacks on an Awami League rally at Bangabandhu Avenue with an attempt to kill Bangabandhu’s daughter Sheikh Hasina," said President Abdul Hamid in his message.

Though Sheikh Hasina escaped death by the grace of almighty Allah, Awami Mahila League`s former President Ivy Rahman and 23 other leaders and activists were killed and many others injured, the head of the state added.

Abdul Hamid said many of the injured persons in the attack became crippled for life and now they are living in endless misery.

"The August 21 grenade attack was aimed at making bankrupt the Awami League and Bangladesh in leadership and stopping the democratic process and establishing autocracy and militancy," he said, adding that the people of the country did not let it happen.

The president expressed his optimism that the pro-democratic and patriotic people would come forward being imbued with the spirit of the War of Liberation to build a dignified, happy, and prosperous Bangladesh.

He said mutual respect and tolerance are a must to make the country`s democracy meaningful.

In a separate message, Prime Minister Sheikh Hasina said the barbaric grenade attack was carried out on that day in 2004 under the direct patronization of the BNP-Jamaat alliance during an anti-terrorism rally of the Awami League to kill her.

Terming the grenade attack a “stigmatized day” in the political history of the country, she said, "Our party leaders and workers saved me from the series of grenade attacks by forming a human shield."

"I survived the attack due to immense blessings of almighty Allah but some 22 leaders and workers including president of Mahila Awami League Ivy Rahman embraced martyrdom,” the premier said, adding that more than 500 leaders and activists, journalists and security personnel were injured.

Sheikh Hasina said it was the moral obligation of a government to arrest the culprits involved with such a heinous attack. But, the then government of BNP protected the killers and helped a number of attackers to leave the country.

They destroyed the evidence of the incident and in the name of investigation, diverted the heinous incident to other direction, she said.

"But truth can never be suppressed. Today, it has come out through investigation that many high-ups of the BNP-Jamaat alliance government were directly involved with the attack," said the Prime Minister.

"Rule of law has been established through this verdict. We hope this verdict will be executed following all legal procedures," she said.

The premier said whenever BNP-Jamaat alliance came to power, they intended to make the country a failed state by patronizing militants and terrorists.

The prime minister said the people of the country voted Awami League to power again through a landslide victory on December 29 in 2008 general election to end all evil attempts and conspiracies of BNP-Jamaat.

She said her government started working to establish the country on a strong economic base overcoming all impediments and Bangladesh is now moving ahead.

Sheikh Hasina said in the last 12 and a half years, the country has achieved expected progress in every sector and Bangladesh is now a "role model" in socioeconomic development.