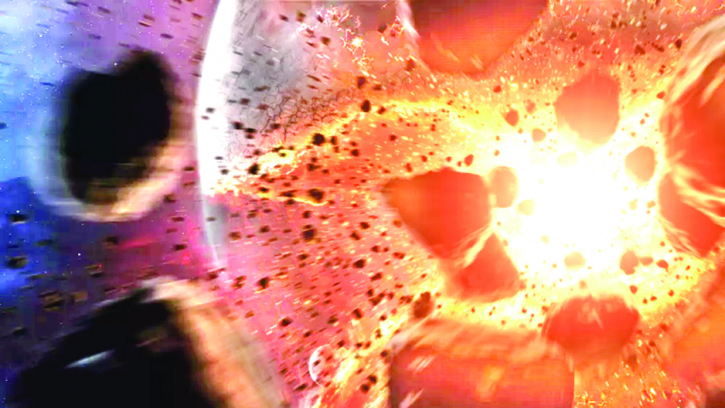 An artist's rendering of a large asteroid smashing into the Earth, raining fire and debris everywhere. (Image credit: Getty)
After dominating the Earth for more than 160 million years, the dinosaurs finally met their doom thanks to a visitor from space. Around 66 million years ago, an asteroid measuring at least 6 miles (10 kilometers) across dealt the dinosaurs' world a devastating blow, triggering earthquakes, tsunamis, volcanic eruptions and climate catastrophes that soon rendered 75% of all living creatures extinct.
But, through all this, Earth itself remained.
Does this mean our planet is immune to an asteroid Armageddon? If the dreaded dino-killing asteroid wasn't enough to end the world, then what would it take? Could a space rock actually destroy the entire Earth — and how big would it have to be?
The short answer is: It would probably take a rock as big as a planet to destroy our planet. But it would take far, far less to obliterate life on Earth — or most of it, anyway.
"An object bigger than Mars hit Earth early in its history and made the moon, without destroying the Earth," Brian Toon, a professor of atmospheric and oceanic sciences at the University of Colorado Boulder who has studied asteroid impacts, told Live Science in an email.
Toon is referring to the giant impact hypothesis — a scientific theory that suggests a Mars-size planet named Theia collided with Earth 4.5 billion years ago, launching a salvo of rocky debris into space that eventually coalesced into our moon. (Mars measures about 4,200 miles, or 6,700 km wide — more than 500 times the width of the dinosaur-destroying asteroid).
Rather than obliterating our planet, scientists theorize that part of Theia's core and mantle fused with our own, remaining underfoot in the coming eons when the first life evolved. Experts disagree as to whether this ancient collision was head-on or just a glancing blow, but there's no doubt that had anything been alive on Earth at the time, Theia would have wiped it out. (Scientists think life could have appeared as early as 4.4 billion years ago, a few million years after the Theia impact.)
As the mass extinction of the non-avian dinosaurs shows, it takes far less than a rogue planet to seriously screw up life on Earth, even if the planet itself remains. NASA considers any space rock a potential hazard if it measures at least 460 feet (140 meters) in diameter and orbits within 4.6 million miles (7.4 million km) of Earth. An impact from such a rock could wipe out an entire city and devastate the land around it, according to NASA.
A collision with a larger rock, measuring at least 0.6 miles wide (1 km wide), would "probably trigger the end of civilization" by unleashing global climate disasters, Gerrit L. Verschuur, an astrophysicist at Rhodes College in Memphis, Tennessee, told Scientific American. And if an impactor the size of the dino-killing asteroid arrived today, it would probably render humans (and countless other species) extinct.
"Broadly speaking, the initial impact creates a vast fireball that kills anyone who can see it," Verschuur said. "Then dust from the impact and smoke from the fires girdles the Earth, plunging our planet into a so-called impact winter."
During this season of suffering, so much dust and noxious gas would cloud the sky that plants could no longer turn sunlight into energy via photosynthesis. Plant life would perish around the world, and animals would soon follow suit. Only very small and ground-dwelling animals (like our early mammal ancestors) would have a shot at survival.
Understandably, NASA and other space agencies take the threat of asteroid impacts very seriously, closely monitoring thousands of potential impactors in our solar system. The good news is, there is no threat of any potentially hazardous asteroid reaching our planet for at least the next 100 years.
And, if a potentially hazardous space rock should unexpectedly change course and put our planet in its sights, NASA is testing a plan to deal with it. On Sept. 26, the space agency smashed an uncrewed rocket into a 525-foot-wide (160 m) asteroid called Dimorphos, in hopes of slightly altering the space rock's trajectory.
Thankfully, Dimorphos isn't headed toward Earth. But through this mission — known as the Double Asteroid Redirection Test (DART) — NASA hopes to test if crashing a spacecraft into an asteroid is a viable means of planetary defense for future asteroid impact scares.
The dinosaurs would be jealous.