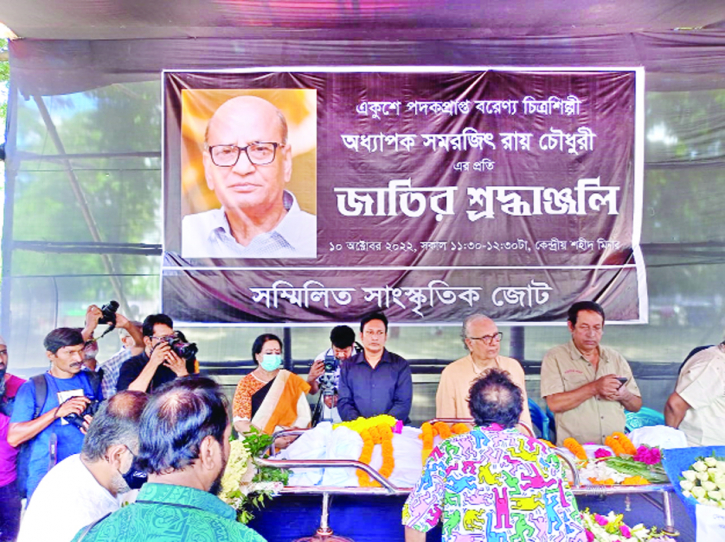 The body of eminent artist Samarjit Roy Chowdhury, who breathed his last at Lab Aid Hospital in Dhaka yesterday, has been taken to the Kalibari crematory in Sabujbagh after being kept at the central Shahid Minar till 12.45pm for legions of admirers to pay their last respects.
Earlier around 11.30am, Roy's dead body was brought to the central Shahid Minar, where many prominent artists and cultural personalities came to catch their last glimpse of the Ekushey Padak-winning artist.
Actor and playwright Ramenda Majumder, artists Hashem Khan, Golam Mostafa, Kamal Pasha Chowdhury, presidents and general secretaries of many cultural organisations, DU Chhatra League general secretary Saddam Hussein, among many others, turned up to pay tribute to him at central Shahid Minar.
Surjit Roy Chowdhury, son of Samarjit Roy Chowdhury, said, "He was not only a teacher but also a father. My father was my friend. My father was the solution to my every problem. My father even prayed for me for the last time with his last breaths."
Prior to the Shahid Minar, Roy's body was also taken to his workplace of nearly six decades, the Fine Arts faculty or Charukola of Dhaka University, for colleagues, students and friends to pay their tributes around 10am.
Students, teachers and dean of Fine Arts faculty, DU vice Chancellor prof. Mohammad Akhtaruzzaman along with other administrative bodies of the University, and Deputy Minister of Cultural Affairs KM Khalid went there to pay their tributes to Prof. Samarjit Roy.
DU Vice Chancellor Mohammad Akhtaruzzaman said, "With the death of Prof. Samarjit Roy, the nation lost a prominent artist. He was one of the greatest and most famous artists of the country."
Prof. Nisar Hossain, dean of the Fine Arts faculty, said, "Prof. Samarjit Roy spent his full life in this faculty as we were able to get him as honorary professor after his retirement from the faculty. His death is a great loss for the nation but the Fine Arts faculty has lost an irreplaceable resource through his death."
Samarjit Roy Chowdhury earned his graphic design degree from the then-Government Art Institute of Dhaka University in 1960 and then started his career as a faculty member.
He was awarded the Ekushey Padak in 2014 for his outstanding contributions to the arts.