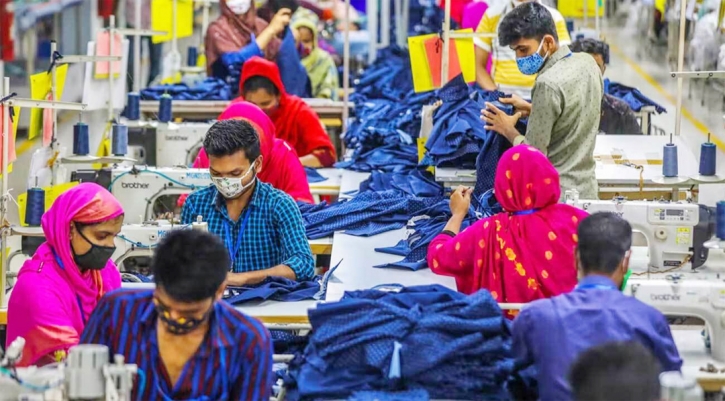 Apparel export to the United States experienced year-on-year growth of 48.57% to $8.46 billion in the January-October period of 2022, according to the most recent data from the Commerce Department's Office of Textiles and Apparel (Otexa).
In the same period last year, Bangladesh exported apparel items worth $5.69 billion to the US, the single largest destination of the country's RMG products, Otexa data said.
Securing the third position, Bangladesh has a 9.74% share in the apparel market of the North American country.
Among the top suppliers to the US market, the y-o-y growth of Bangladesh is the highest, according to Otexa data.
Moreover, Bangladesh exported apparel items worth $7.14 billion to the United States in 2021. But this year, the country managed to exceed the full-year earnings of 2021 in just nine months (Jan-Sep) when the earnings stretched $7.55 billion.
In the first ten months (Jan-Oct), Bangladesh further strengthened its position by exporting $8.46 billion, finding a silver lining despite the ongoing global economic turmoil.
According to the Otexa data, during the same period, the overall US apparel imports reached $87.09 billion, noting a 30.16% y-o-y rise, up from $66.91 billion in the January-October period of 2021.
The Otexa data also showed that the single-month apparel export earnings from the US in October grew to $910.86 million from $694.12 million in the same month last year.
This year, Bangladesh earned $755.94 million in January, $688.47 million in February, $1.03 billion in March, $820.52 million in April, $815 million in May, $906 million in June, $693.22 million in July, $928.56 million in August and $912.71 million in September.
According to the data, China and Vietnam occupied the first and the second highest positions respectively in the US market as of October 2022.
Among the other major suppliers, US apparel imports from China in the January-October period of 2022 experienced a growth of 20.76% to $19.32 billion from $16 billion in the same period of 2021. China has a market share of 22.53%.
Vietnam exported apparel items worth $16.04 billion in the January-October period of 2022, fetching a growth of 32.01% from $12.15 billion in the same period of last year, claiming a market share of 17.94%, Otexa data stated.
Followed by Bangladesh, India secured the fourth position by exporting apparel items worth $5 billion in the January-October period of 2022, registering a growth of 45.04% from $3.45 billion in the mentioned period of 2021. India has a market share of 5.65%.
According to the Otexa data, RMG imports of the US from Indonesia in the first ten months of 2022 increased by 47.57% to $4.94 billion while the imports from Cambodia grew by 36.90% to $3.92 billion in the same period, which made them the fifth and sixth with a market share of 5.64% and 4.35% respectively.
Talking to , Shahidullah Azim, vice-president of the Bangladesh Garment Manufacturers and Exporters Association (BGMEA), said that the US is always a big market for Bangladesh.
“However, the increased price of raw materials and freight charges have also impacted the growth. Moreover, Bangladesh has been consistently benefiting from the ongoing trade issues with China in terms of exports to the US and we hope this feature will continue,” he added.
Moreover, a number of shipments were held or deferred, which are now being cleared.
Regarding the picking up of orders, he said that the product inquiries are increasing more than in the past months. The direct order placing, however, has not increased significantly yet.
“Inquiries are still not coming in as much as the post-pandemic situation. But what's coming is very positive,” he added.
He also said that as things stand now, a sluggish trend in exports may continue for another two-three months. But a change could come in February.
“We will know how much growth we have due to the increased number of inquiries and orders next February,” he added.
BGMEA Director Mohiuddin Rubel said that as one of the top three competitors, the market share gap with the other two competitors is very high for Bangladesh.
“But our growth rate is higher than theirs, which is a positive aspect,” he added.
He also said that this growth is actually an outcome of the successful response to the Covid-19 pandemic.
“We have been proactive during the pandemic. We followed strict hygiene rules and were vigilant about compliance. Due to that, we retained the trust of the US buyers,” he added.
However, manufacturers also said that they should not depend on the European or North American market only. Instead, they need to find new markets in East Asia, the Middle East, India and other regions.