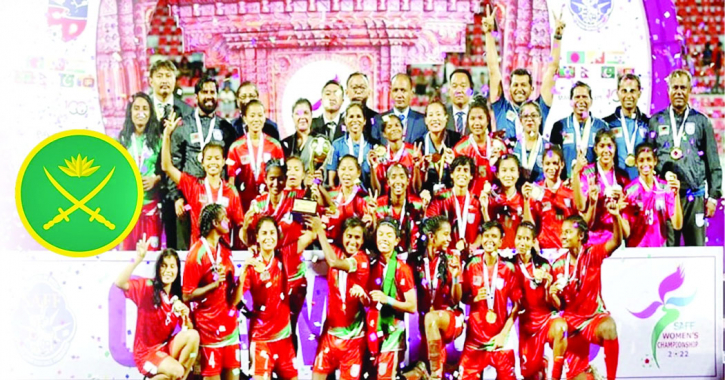 Bangladesh Army has announced a reward of BDT 1 crore for the Bangladesh women's football team who recently won the SAFF Championship in Nepal.
The army made the announcement on Friday.
Bangladesh women's football team became the undefeated champion in the SAFF Championship. They scored a total of 23 goals in this premier football tournament in South Asia, while they conceded only one goal.
Bangladesh won the title by defeating the hosts Nepal 3-1 at the Dasharath Stadium in Kathmandu.
After returning home, the Bangladesh team was given a royal welcome.
They were taken to the Bangladesh Football Federation from the airport in an open-deck bus. Along the way to the federation headquarters, thousands of supporters congratulated the team on their first SAFF title win.
No other Bangladeshi team has been given such a reception before.
The Bangladesh Cricket Board has announced a reward of Tk50 lakh for them while two officials of the Bangladesh Football Federation have announced a total reward of Tk1 crore as well.