4 killed as BRT girder falls on car in Uttara 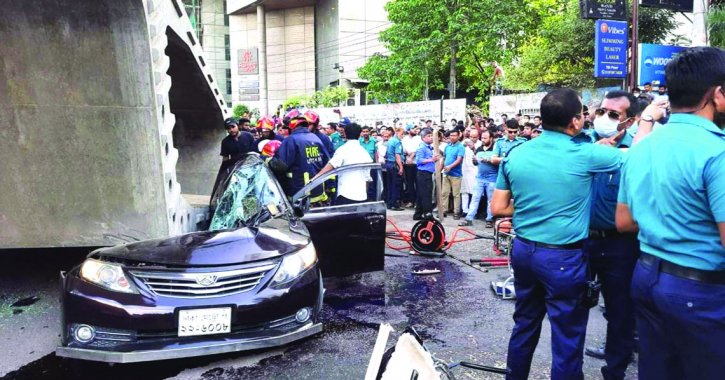 At least four people, including children, were killed when a girder fell on their car from a crane during Bus Rapid Transit (BRT) project work on Dhaka-Mymensingh road at Uttara in the capital on Monday.
The accident took place around 3:30pm, Officer-in-Charge (OC) Mohammad Mohsin of Uttara West police station confirmed the matter to.
The deceased were identified as Rubel, 50, Jharna, 28, Jannat, 6, and Zakaria, 2.
Besides, two more--Hridoy and Riya--were injured in the accident.  The OC said: "A girder fell on a private car while being lifted by a crane. It will be possible to tell if there are any passengers left inside the private car after the girder is removed. Rescue operations are ongoing.”
Meanwhile, BRT Managing Director (MD) Shafiqul Islam claimed that the incident occurred due to a mechanical fault.
He said: "While we were taking the girder from one place to another by crane, the crane probably tilted and the girder fell down."
When asked about who is to blame for the incident, he said: "At the moment, I cannot say anything without knowing the details. This is a mechanical problem. It is not related to security measures.”
Long traffic jams were created in the surrounding areas due to rescue operations.