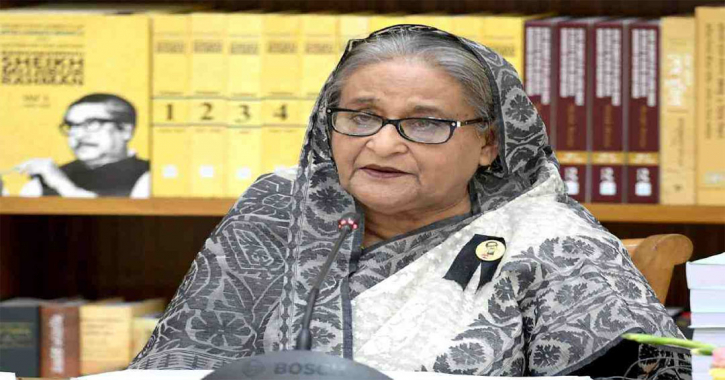 The government is contemplating ways to bringing down the prices of essential commodities that have gone beyond the reach of commoners following the fuel oil price hike.
Prime Minister Sheikh Hasina said this on Tuesday while speaking at the regular meeting of the Executive Committee of National Economic Council (ECNEC) at NEC, joining virtually from her official residence Ganabhaban. “I think that it is important now to bring down the prices of the essentials at a tolerable level and within the purchasing power of the common people,” she said.
She mentioned about the government’s move to sell rice among 50 lakh families at the rate of Tk 15 per kg.
“We will provide special family cards to one crore people by which they will be able to procure essential commodities at fair price, we are taking the steps,” she said.
Hasina said that she thinks that the government has to take some more steps to save the low-and-middle income groups from sufferings due to the recent price hike. She again said that she is aware that due to the fuel oil price hike the prices of essential commodities have increased.
“People are suffering, lower-income group, middle-income group and fixed income group are facing severe hurdles. We can realise that,” she said.
In this connection, she mentioned that she does her politics for the people and whenever people suffer, she also feels the pain.
The prime minister reiterated her call to increase the domestic production to lessen the dependency on imports.
She said that Russia-Ukraine war, sanctions and counter-sanctions resulted in soaring prices of various items in the global market.
“We had the ability to purchase, but the prices went up even beyond the reach of our purchasing capacity,” she said.
She mentioned that such uncertainty coupled with various conspiracies had always struck Bangladesh whenever it started moving forward and improve the living standards of the people.
The PM said that prices of fuel shot up alarmingly and her government has been providing subsidy to make it affordable.
“We tried to reduce the expenditure through austerity, but the demand of the fuel oil was the same. That means the fuel oil were being smuggled out,” she said.
She said that it is very much normal in the world to adjust the fuel prices comparing with the neighbouring countries to prevent smuggling.
“We also took that initiative and we have to increase the fuel oil price,” she said.
Hasina asked the ministers and public servants to consider ways on how to minimise the pains of people due to price spiral.
“I will sit very soon to find out the ways for the mass people,” she said.
The premier said that the government wants to buy fuel oil, fertiliser and wheat from Russia.
In this connection she mentioned she had given the responsibility to her Principal Secretary to talk to the Russian Ambassador regarding the matter.
“The foreign ministry can take initiative in this matter, we will procure fuel oil from them (Russia) with our own fund as the SWIFT is closed and the price of dollar is very much high,” she said.
She blamed the sanctions of the USA over Russia for global price hike of oil and energy.
She again said that Russian and US currencies are the main gainers due to the Russia- Ukraine war, sanctions and counter-sanctions.
The prime minister pointed to the new provocative move regarding Taiwan and efforts to create a war- like situation there by the USA.
“If this happens, the situation of our country will be further worsened, the whole world will be in deep problem further, people will fall in further trouble,” she said.
She said that the USA does not understand anything except their own interest.
“We can understand that the USA government is taking these steps considering the upcoming election in their country, we have that capability to understand this type of politics,” she said.
She mentioned that the US government has to understand that due to these moves people of their country will also suffer.
“We want peace, not war. An environment of peace can ensure the development in any country,” she said.
Talking about importing items from various countries, she put emphasis on starting negotiations so that these imports can be done by exchanging own currencies.
“I know that while we will compare our currencies with the US dollar, we might incur some loss. But that should not be taken into consideration,” she said.
She firmly declared government’s stance to provide subsidy to agriculture sector and do whatever is needed.
“We have to ensure the food production and goods supply,” she said.