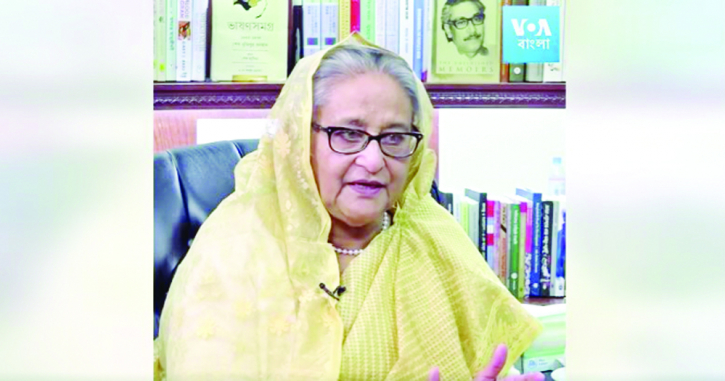 Prime Minister Sheikh Hasina has said the Election Commission is completely “free and independent” and a system has been established through independent EC to hold “free and fair” elections in Bangladesh.
“Now the Election Commission is completely free. We have made the EC independent completely,” she told the Bengali service of Voice of America (VoA) in an interview aired on Tuesday. The prime minister, now on a visit to the US, responded to a number of questions on democracy, human rights, Rohingya crisis, Digital Security Act and other issues. She said Bangladesh has progressed much during her three consecutive tenures. “The country didn’t see the downtrend; rather the country witnessed the advancement (during our three consecutive terms).” The premier said the rate of poverty has been decreased; people are getting food, education and healthcare. “We’re fulfilling their all basic needs.” Responding to a question, PM Hasina described how political parties like BNP and Jatiya Party were born under the leadership of military dictators and how the military dictators seized the power illegally. She said the parties which are born under military dictators’ leadership are not used to develop relations with the common people going close to the people; rather they are used to snatch votes and clinch to power by force or at gunpoint. “They might not like the democratic trend.”
Former UN High Commissioner for Human Rights Michelle Bachelet, during her visit to Bangladesh, encouraged the government to create an “independent, specialised mechanism” that works closely with victims, families and civil society to investigate allegations of enforced disappearances and extrajudicial killings.
When asked about it, the PM said there is National Human Rights Commission in Bangladesh which always takes steps. “They look into it if there is any allegation.”
She said after the repeated requests, a list of around 70 people was received and there were seven cases of death.
Hasina said wherever any injustice takes place; steps are taken immediately as per the law which was not seen in the past.
“Not abusing human rights, we are protecting human rights,” she said, adding that her government has made the people aware of their rights and made it sure that people can enjoy their rights.
The Prime Minister referred to killings and disappearances of hundreds of army, air force, Awami League leaders and activists during military dictator Ziaur Rahman and their families did not even get the bodies and had not been able to know their faults.