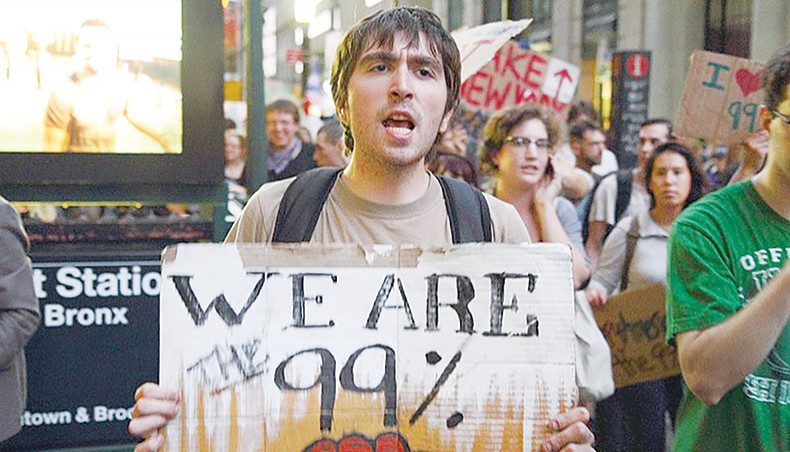 WHEN I search for the historical significance of Occupy Wall Street, my mind goes first not to the assemblies, the marches, or even the arrests. Rather, the first memory that arises is a 2011 meeting of the Marxist reading group that I attended from 2010 to 2018, my years in graduate school. We dedicated a session that October to Occupy, and the group swelled from its normal five or ten to a packed house, full of dozens of people trying to make sense of what was happening. (This had also happened the previous February during the Wisconsin Capitol occupation and the Arab uprisings.)
Whatever we discussed that evening is hazy to me now — was ‘the 99 percent’ a useful ‘language of class’ or a populist obfuscation, none of us knew—except for one comment, from Michael Denning, the great Marxist cultural historian. The most significant consequence of Occupy, Denning predicted, would not be direct political victories, but rather the experience itself, the individual lessons it taught and the ways that it became embedded in the life histories of those who went through it. As in all intense social movement cycles, participants would find themselves doing things they would not have anticipated, alongside people they would not otherwise have known. They would change not the state but themselves, and then carry that change with them elsewhere. In that moment, I sensed that I was in a distinct political cohort in formation, a sense which became common to Occupy.
From this perspective, the movement’s legacy is best understood as an episode in the history of ideology. It is at the level of ideology where it had its greatest effect — which is why it is so often, and wrongly, dismissed as having had no effect at all.
Most straightforwardly, Occupy was the critical event in the formation of a new anticapitalist intellectual milieu. You could go to Zuccotti Park and find people arguing about policing, finance, feminism, climate — and out of this ferment, new institutions took shape and old ones changed. The New Inquiry and Jacobin both slightly predated the occupations (and perhaps anticipated them), but both gained much of their solidity from the participation of the resulting coterie. n+1 and Dissent both underwent much-heralded generational transformations, pointing them in newly radicalised directions. In 2012, the Brooklyn Institute for Social Research appeared, founded by left-wing Columbia University graduate students looking for a meaningful alternative to dead-end academic careers. All this, it turns out, had consequences.
It is not that the individuals in this intellectual cohort were all important to the development of Occupy (with the notable exception of the writers Vicky Osterweil and Malcolm Harris, who helped bring a crowd early on with a fake promise of a Radiohead appearance). Rather, Occupy was central in some way for most of them, and the extended world of activists, writers, and thinkers around them. Or, I should say, for us. The significance of the day I spent in jail after an Occupy protest, for example, was not just the fact of my first arrest. Rather, I can well recall numerous people I met in the holding cell and trace their trajectories across the last decade: they are publishing essays, writing history, leading labour and tenant organising, working in electoral politics, making documentary films. (And — segregated as we were by gender — this was only the men.) An environment like this made it possible to construct a new political identity, and it seems safe to say that thousands did so.
From here it is easy to draw a line to the rising workplace militancy of academics, journalists, museum workers, and other similar professional workers in the last decade. Adjunct organising began to take off in 2012, while for graduate students in the private sector, the key breakthrough occurred at New York University in 2013 — the closest research institution to Zuccotti Park, not coincidentally. Graduate workers there had organised for and around the occupation extensively, including into its afterlives such as Occupy Sandy and Strike Debt. An avalanche of campus campaigns followed across the country. In many of these places, local occupations and workplace organising blurred with each other: activists met over group meals outside, then met again inside around tables to make plans.
In the public sector, the University of California in particular — where campus occupations in 2009 had prefigured the 2011event — saw explosive student activity around tuition and debt. When University of California, Davis chancellor Linda Katehi sent police to clear the occupation on her campus, they pepper-sprayed seated students, generating one of the lasting images of the movement: the outrage that resulted now looks like a clear forerunner for the growth of abolitionist ideas beyond the Black radical left. The UC system, and Berkeley and Santa Cruz especially, also saw rolling waves of graduate student militancy over subsequent years, particularly in 2014 — with campus policing again central to the dispute.

Concepts require a material basis if they are to gain and keep purchase — groups of people whose job is to manufacture them, refine them, apply them, and spread them. Institutions of culture produce and propagate ideology, and the impact that Occupy made on the thousands of young people negotiating precarious entries into the culture industries in the past decade is almost too large to grasp. It condensed into an episode the structural forces producing a distinctive generational experience of dispossession and anger, and at the same time created a context in which individuals could see themselves in relation to that experience, and in relation to others. Over the next decade, thousands who went on to do one kind of ideological work or another found a way to represent something of what Occupy had meant — or more generally, who they had become in 2011.

Earlier this year, a student in my office hours asked me if I knew about some radical writer. I smiled and said, ‘Oh sure, I met that guy once at a Verso party seven or eight years ago.’ The student blinked at me — ‘The Verso loft? You’ve actually been there?’ While it’s tempting to roll one’s eyes at such a totemic status for a party venue for the New York media-centric left — and easy to mock as an instance of an in-crowd — we ought to take its significance seriously.

Certainly, Occupy is not reducible to some number of careers in the cultural superstructure. And like any scene, this one has its narcissism, its pecking orders, its blind spots, and its abuses. But it must be acknowledged the movement of 2011 created what cultural theorist Raymond Williams would have called a ‘structure of feeling’: a loose system of institutions of production and reception of ideology, in which a common experience and mood could solidify somewhat into a common language, shared even among antagonists within the left.

It is not only organisers, writers, editors, or podcasters who make such a thing possible. It is also the active participation of an audience formed through the same experiences as the cultural producers, equally engaged in trying to make sense of a historical moment: the thousands, then millions, who found themselves chafing at dead-end jobs, mounting debt, egregious police violence. In this sense, the world of the little magazines and radical publishers, the podcasters and the socialist activists, is not only inward-facing. If it were, we wouldn’t be living through a recovery of left-wing politics. To take off, ideologies require a historical environment in which cultural producers and audiences can recognise each other, based on the experiences they have shared. Where else would this recognition have come from?

Why Bangladesh way behind from UK” s Education standard