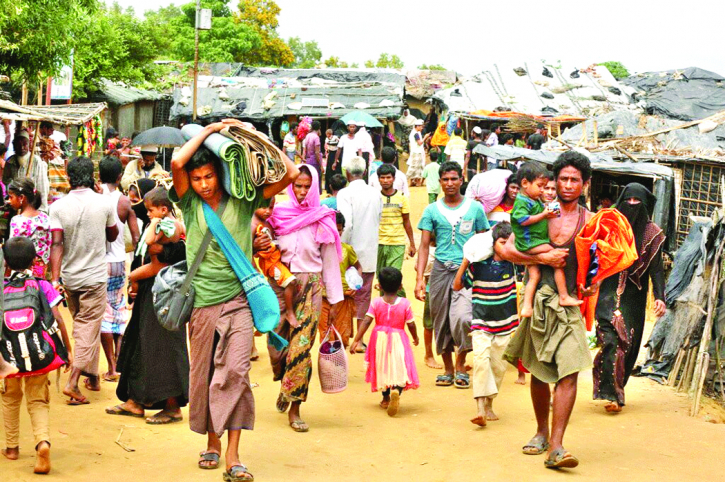 Myanmar's violent ethnic cleansing program, which forcibly forced roughly a million Rohingya Muslims into Bangladeshi refugee camps, just marks its fifth anniversary on Thursday (August 25).
During the past five years, the population of the refugees increase.  Some 30,000 Rohingya children are being born every year in Bangladesh on average. As such, the number of Rohingya population has increased to more than 1.2 million, according to the latest estimation by United Nations's assessment revealed after the 39th meeting of the National Task Force on Rohingya affairs last week.
The mass exodus is the outcome of horrific Myanmar military attacks against the Rohingya people in Myanmar, which prompted three quarters of a million Rohingyas to flee over the country's borders, was nearly five years ago on August 5, 2017.
Bangladesh's permanent representative to United Nations --ambassador Rabab Fatima addressed the UN General Assembly in latest June, urging the UN to expand its programs  to return the forcibly displaced Rohingyas back to Myanmar.
Ambassador Fatima further requested that the Special Envoy endeavor to ensure that the bilateral return arrangements for Rohingya refugees from Bangladesh are implemented as soon as possible.
Bangladesh's representative to the UN, we believe, was quite explicit in her speech. It's been nearly 5 years. In one of the worst man-made humanitarian tragedies in modern history, almost a million Rohingyas were forced to flee their homes. And the assurance of their safe return has yet to be fulfilled.
In November 2019, Gambia, on behalf of the fifty-seven-nation Organization of Islamic Cooperation, filed the first international lawsuit against Myanmar at the International Court of Justice, accusing the country of violating the UN Genocide Convention.
The court unanimously ruled in January 2020 that Myanmar must take emergency measure to protect Rohingya from violence and preserve evidence of possible genocide.
Separately, the ICC authorized an investigation into alleged atrocities in November 2019. The International Court of Justice ruled on the recent July 22, that The Gambia’s case for genocide against Myanmar would proceed despite Myanmar’s preliminary objections. According to academics and rights campaigners, the International Court of Justice (ICJ) ruling has opened up fresh opportunities for the international community to put pressure on the Myanmar military to provide justice for the Rohingyas. Nevertheless, the final ruling in the case could take years.
The point is that Myanmar is at the heart of the Rohingya catastrophe. The ruling military junta  must step up its efforts to secure the refugees' voluntary and dignified return.
Bangladesh has done more than enough to accommodate over a million Rohingya refugees at enormous economic, environmental, and security costs; now it is time for the UN to assess the situation. Bangladesh's efforts alone will not be sufficient to bring about a long-term solution to the situation.
At the same time, accountability for all transgressions and atrocities in Myanmar is critical. As a result, we would like to remind the UN Security Council to keep an eye on the International Court of Justice's (ICJ) Provisional Measures in the case brought by the Gambia on behalf of the Organisation of Islamic Cooperation (OIC).
The international community, particularly UN member nations, has a tremendous humanitarian responsibility and commitment to Rohingya refugees.
The world community must awaken from its slumber and see that the man-made crisis was not caused by Bangladesh, but rather by Myanmar's internal turmoil, which was unfairly imposed on Bangladesh.
Despite a series of UN resolutions, Myanmar has showed little interest in repatriating the refugees in dignity and with full citizenship rights.
Apart from UN member states, regional countries and Myanmar's commercial partners, such as China, India, Japan, Indonesia, and Germany, ASEAN and OIC countries must also step up to put pressure on Myanmar to solve the humanitarian situation seriously.  Last but not least, if the international community fails to find a long-term solution to the humanitarian catastrophe, it must commit to taking in a million or more forcibly displaced refugees currently sheltering in Bangladesh, as it has done with many other refugees in the past.
We urge immediate action to assist in making significant progress in building the conditions for the safe, voluntary, dignified, and long-term return of refugees to Myanmar. It is vital to address the core causes of Myanmar's systematic discrimination, disenfranchisement, and communal violence.
We also urge the world community to remain in solidarity with Rohingya refugees, as well as the Bangladeshi government and people who are kindly hosting them. The United Nations is committed to providing active help in the future. The Rohingya's misery must not become a political football.
At a time when the funds for the Rohingyas are dwindling, and when the international community has grown evidently disinterested in safeguarding the community, the sustainable course of action that the international community should undertake is the safe and dignified repatriation of the Rohingyas through international mechanisms.
During the latest visit of the United Nations High Commissioner for Human Rights, Michelle Bachelet this month, Prime Minister Sheikh Hasina has rightly pointed out to Ms Bachelet that Rohingya refugees in Bangladesh must eventually return to Myanmar.
It's been almost five years since the Myanmar military carried out its most recent genocidal campaign against the Rohingyas, forcing around a million of them to flee to Bangladesh in search of safety. For a resource-constrained country like ours, hosting so many of refugees for five years has been a great challenge indeed.
Thus, on the fifth anniversary of the Rohingya crisis, we urge the world to do something for the Rohingya refugees. They are not naturally refugees. They have birth right to live in their birthplace, Myanmar, with proper dignity. Otherwise, as a conscious human being, we can't ignore our responsibility.
The writer is a Dhaka-based freelance writer and women’s and human rights activist at Bangladesh Mohila odhikar Parishad.

Why Bangladesh way behind from UK” s Education standard