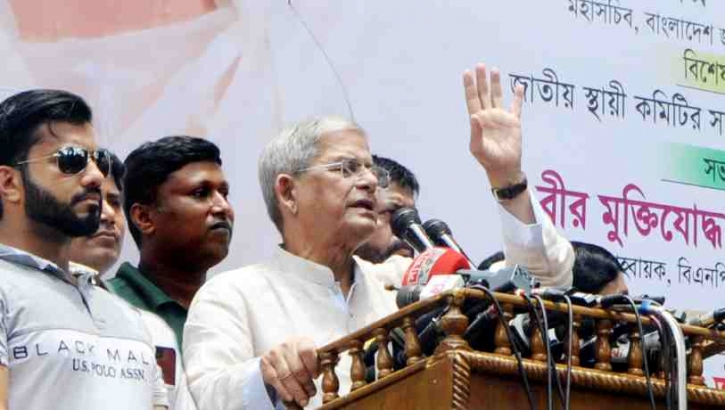 BNP Secretary General Mirza Fakhrul Islam Alamgir on Saturday alleged that the government has pushed the entire roads management of the country towards anarchy.
“Our Road Transport and Bridges Minister Obaidul Quader wearing a fancy suit nicely said that what Awami League was doing never happened in the past. But you have pushed the entire roads management towards anarchy, he said.
The BNP leader said hundreds of people are losing their lives in road accidents due to chaos on the roads. “We saw that our 11 students who were travelling in a microbus died as a train hit them yesterday (Friday). We can show numerous examples like this every day.” He came up with the comments while speaking at a rally organised by Dhaka South city unit BNP in front of the National Press Club protesting the ongoing load-shedding, mismanagement in the energy sector and the hikes in fuel and gas prices.
Fakhrul accused the government of dashing the dream of the country’s people and the freedom fighters to have a democratic and prosperous Bangladesh.
He alleged that the current authoritarian government has destroyed democracy, the judiciary and the banking sector because of its theft, robbery and greed.
“There is a saying in Bengali literature that the kingdom is ruined by the fault of the king, but the people suffer". Sheikh Hasina's government is responsible for the sufferings we’re going through,” the BNP leader observed.
He called upon the BNP leaders and workers to take an oath for ousting the 'monstrous' 'fascist' government by launching a one-point demand.
As a democratic party, Fakhrul said BNP has the responsibility to protect the county and its people from the misrule of the current despotic regime. “If we can form a government by winning the people's movement, we will certainly solve all the problems and establish this country as a truly people's state."