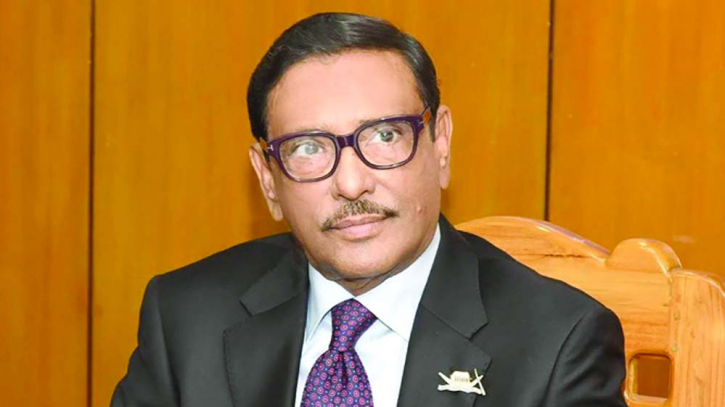 Awami League (AL) General Secretary and Road Transport and Bridges Minister Obaidul Quader yesterday said Awami League (AL) President and Prime Minister Sheikh Hasina is the most popular leader in Bangladesh after 1975.
"Although you are arranging rallies, people are not responding. Sheikh Hasina's popularity is the main reason. Who is more popular will be proved in the next general election," Quader said, referring to the BNP leaders.
The ruling party leader was addressing a meeting in front of the Awami League central office at Bangabandhu Avenue here.
The AL organized the meeting marking the 18th anniversary of the tragic grenade attack on August 21, 2004. Awami League chief and Prime Minister Sheikh Hasina presided over the meeting while Awami League Publicity and Publication Secretary Dr Abdus Sobhan Golap moderated it.
About the next generation election, the road transport minister said. "The election is ahead, Please wait ...it will be proved what Bangladeshi people want...Sheikh Hasina is the most popular as people are with her. People are happy with her development achievements."
Drawing attention of BNP Secretary General Fakhrul Islam Alamgir, Quader said BNP's popularity now hits the bottom due to holding rally frequently at the same places like Paltan and Press Club.
"I will say the most popular leader in Bangladesh after 75 is Sheikh Hasina who is also the daughter of Bangabandhu Sheikh Mujibur Rahman. This reality is not only admitted by Bangladesh but also acknowledged globally," said the ruling party leader.
Citing the generosity of Prime Minister Sheikh Hasina, the road transport minister said. "You [Sheikh Hasina] have pardoned many of them. Those who were the mastermind of Bangabadhu killing were also the mastermind of grenade attack on August 21."
Quoting Mufti Hannan, an Islamist leader who was convicted and hanged for grenade attack on August 21, Quader said that they had started operation after the instruction given from the Hawa Bhaban.
The bitter political relation between BNP and AL was created by the BNP, said Quader, adding that yet Sheikh Hasina called the BNP leaders to her official residence and tried to make conversation over telephone, but ultimate she was insulted.
Regarding the death of Khaleda Zia's younger son Arafat Rahman Koko, Quader said Prime Minister Sheikh Hasina rushed to Begum Zia's residence to console her but the Prime Minister was not allowed to access Begum Zia's residence. "So, BNP is responsible for stopping dialogue between the two political parties," he added.
Recalling August 21 grenade attack, the minister said more than 500 ruling party leaders and workers were injured on that day. Most of the victims became physically disabled and Sheikh Hasina took initiative to provide them with medical treatment, he said.
Talking about BNP Chairperson's birthdays, the ruling party leader questioned how many birth days an individual may have.
She (Khaleda) had celebrated six birthdays during the pandemic. "How will the people believe her as a leader as she has such a huge number of birthdays?" he asked.