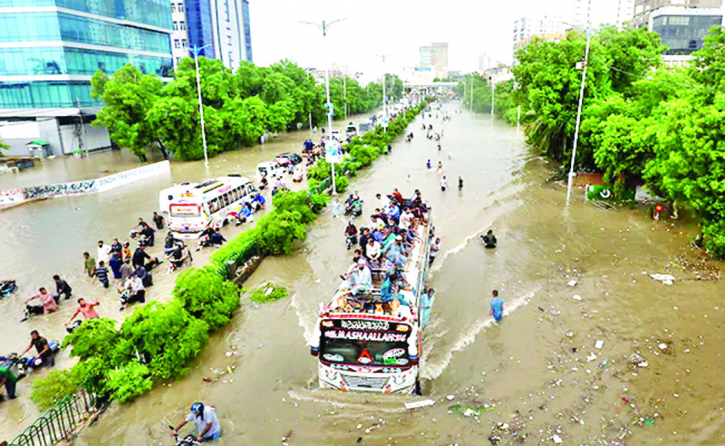 A third of Pakistan was under water as a result of flooding caused by record monsoon rains, Climate Change Minister Sherry Rehman said Monday, creating a crisis of "unimaginable proportions".
"It's all one big ocean, there's no dry land to pump the water out," she told AFP, as the country wrestles with floods that have affected 33 million people.Unusually heavy monsoon rains have caused devastating floods in both the north and south of the country, affecting more than 30 million people and killing more than 1,000.
"I haven't seen destruction of this scale, I find it very difficult to put into words… it is overwhelming," said Pakistan's Foreign Minister Bilawal Bhutto-Zardari in an interview with Reuters, adding many crops that provided much of the population's livelihoods had been wiped out. "Obviously this will have an effect on the overall economic situation," he said.
The South Asian nation was already in an economic crisis, facing high inflation, a depreciating currency and a current account deficit.
The IMF board will decide this week on whether to release $1.2 billion as part of the seventh and eighth tranches of Pakistan's bailout program, which it entered in 2019.
Bhutto-Zardari said the board was expected to approve the release given an agreement between Pakistani officials and IMF staff had already been reached and he hoped in coming months the IMF would recognize the impact of the floods.Bhutto-Zardari, the son of assassinated former Prime Minister Benazir Bhutto, said the economic impact was still being assessed, but that some estimates had put it at $4 billion. Given the impact on infrastructure and people's livelihoods, he said he expected the total figure would be much higher.

Pakistan's central bank had already flagged the record monsoon rainfall as a threat to economic output given its impact on agriculture.

Pakistan would this week launch an appeal asking United Nations member states to contribute to relief efforts, Bhutto-Zardari said, and the country needed to look at how it would handle the longer-term impacts of climate change.