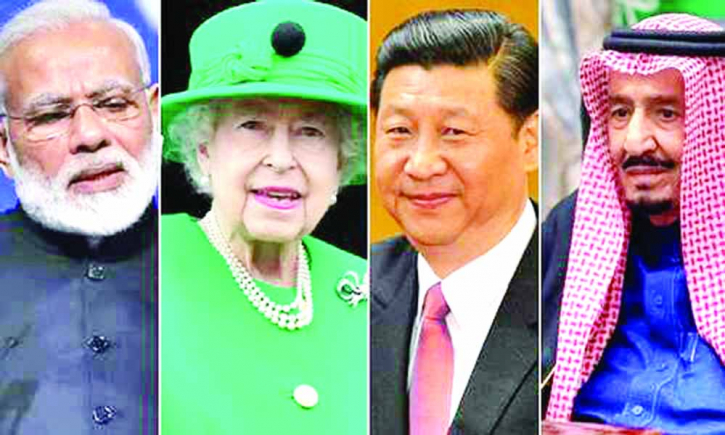 Chinese President Xi Jinping, Saudi King Salman bin Abdulaziz, Indian Prime Minister Nar­en­dra Modi, and Britain's Queen Elizabeth on Monday expressed solidarity with Pakistan over the loss of lives in devastating floods.
President Xi and Prime Minister Li Keqiang in their messages to President Arif Alvi and PM Shehbaz Sharif hoped that the government and people of Pakistan will overcome the challenge and rebuild the devastated areas at the earliest.
Chinese ambassador Nong Rong, at an event in Islamabad, said the Chinese government was fast-tracking the delivery of 25,000 tents and other supplies to Pakistan. The Red Cross Society of China is providing $300,000, in emergency cash assistance, to the Pakistan Red Crescent Society whereas the All China Enterprises Association in Pakistan donated Rs15 million to the premier's relief fund, the envoy added.
Earlier, Saudi King Salman bin Abdulaziz Al Saud and Crown Prince Mohammed bin Salman expressed sympathies with President Alvi over the loss of lives and injuries to hundreds of people in the floods.
In their separate mess­ages, the king and the pri­nce expressed "profound sorrow and sincere sympathy" to the president, families of the deceased, and the people of Pakistan. India's Modi tweeted: "Saddened to see the devastation caused by the floods in Pakistan. We extend our heartfelt condolences to the families of the victims, the injured and all those affected by this natural calamity and hope for an early restoration of normalcy."
In a message to President Arif Alvi, Queen Elizabeth said: "I am deeply saddened to hear of the tragic loss of life and destruction caused by the floods across Pakistan," she said in a message issued by the British High Commission of Islamabad. The queen said, "My thoughts are with all those who have been affected, as well as those working in difficult circumstances to support the recovery efforts." Dawn