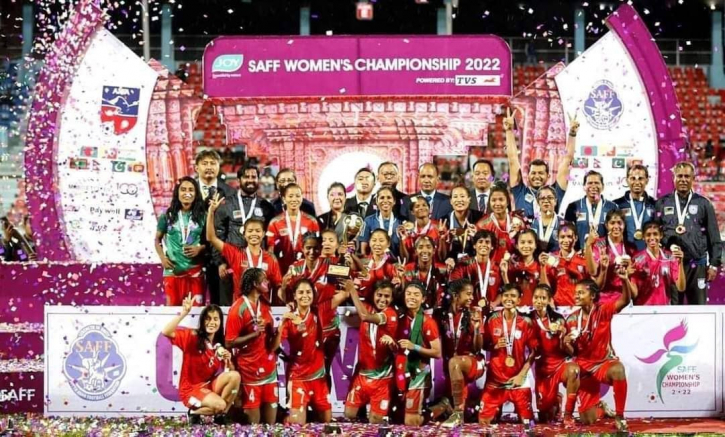 Sabina and co created history as they sealed Bangladesh's maiden silverware by beating Nepal 3-1 in the Saff Women's Championship 2022 final at the Dasharath Stadium. Saff finally got a new champion in its sixth edition after India's one-sided dominance in the first five competitions.
Nepal, meanwhile, had to contend with the runners-up trophy for the fifth time. Krishna Rani Sarkar was the star of the show with her goals in both halves of the game. 'Super sub' Shamsunnahar Jr and Krishna Rani Sarkar's goals gave Bangladesh a 2-0 lead at halftime.
Nepal started the second half aggressively searching for the first goal and put pressure on Bangladesh. Anita Basnet pulled one back for the hosts in the 70th minute. It seemed like the goal had breathed life into the Nepal team as well as the fans but that was short-lived. Nepal's high line saw Bangladeshdesh unleash a counter-attack that saw Krishna score her second in the 77th minute, just seven minutes after the Nepal goal to seal the game for Bangladesh.
Bangladesh scored 23 goals in the competition and conceded only one, that too in the final. Sabina, who has appeared in every edition of the competition, is currently the highest scorer in the ongoing edition with eight goals, which includes two hattricks.After winning the first match of the tournament, Sabina said that there was nothing left for her to do in SAFF Championships, other than, ‘winning the trophy’.

PM Hasina to give prize money to SAFF champions

Did think-tank’s exercise serve any purpose?