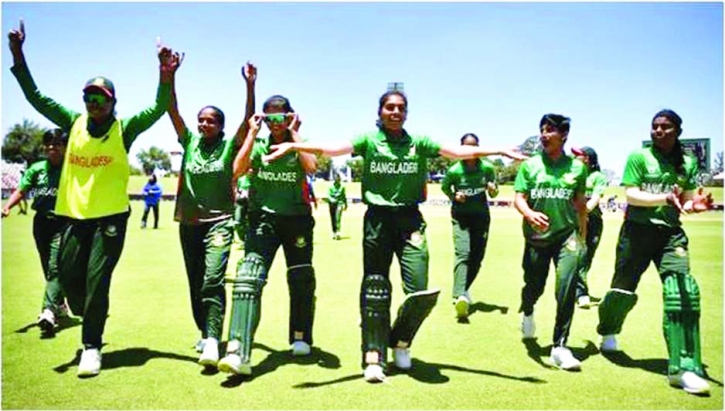 Bangladesh Women's Under-19 made an epic start in the first ever ICC Under-19 Twenty20 World Cup, crushing mighty Australia by 7 wickets at Benoni in South Africa yesterday.
Dilara Akter, the wicket-keeper batter was instrumental in the landmark victory, hitting a 42 ball-40 runs knock that included seven fours. Thanks to her serene innings, Bangladesh reached the victory target with 132-3, overhauling Australia's 130-5.
But Bangladesh made a disastrous start, losing opener Misty Shaha in the first ball of the innings. Dilara then took the anchor role and rescued Bangladesh from the precarious state, ably supported by Afia Prottasha who scored 24 off 22 with two fours and two sixes. Australia's Chloes Ainsworth broke the partnership with the wicket of Dilara but not before then the batter paved Bangladesh's platform of a historical victory.
The rest was done by Shorna Akter and Sumaiya Akter who utilized the platform set by Dilara well to add an 61-run for the unbeaten fourth wicket stand as Bangladesh women's team won their first match against Australia in any format of the cricket at any level.