Labour export sees over 270% growth in the last 7 months 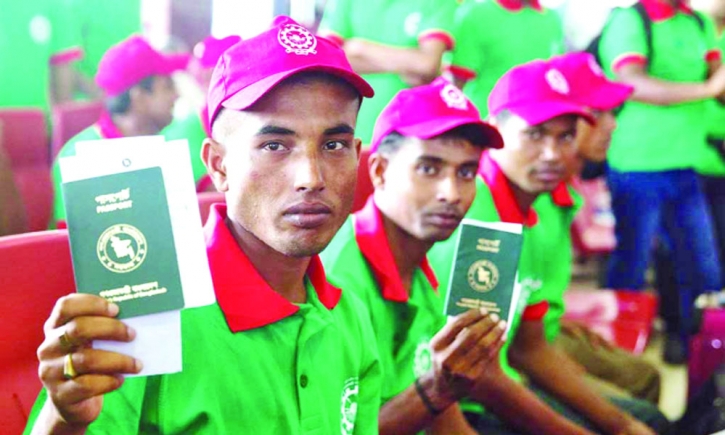 Special Correspondent
Bangladesh exported a total of 691,017 workers during the January-July period of the current calendar year as against 256,187 during the same period of the previous year posting nearly 270% growth, according to Bureau, Manpower, Employment and Trading (BMET).
However, the labour export during the period of July dropped 32.31% compared to the previous month of June. Bangladesh exported a total of 75,499 workers during the month of July as against 111,539 workers to different countries during the month of June.
Saudi Arabia was the top destination of Bangladeshi workers with 425,563 workers (over 61.59% of the market share) followed by Oman with 97,750 workers (14.15%), UAE with 70,203 workers (10.16%), Singapore with 34,421 (4.98 %), Jordan with 9,524 workers (1.38 %), Qatar with 12,344 (1.79 %), Kuwait with 8607 workers (1.25%), Italy with 906 workers (0.13%), Japan 262, 0.04 % ) and the UK with 214 workers (0.03%), according to BMET data. Though Bangladesh's labour export shot up by 270 % during the January-July period of this calendar year, compared to the same period of 2021, the prolonged Russia-Ukraine war and growing high cost of living may rein in the tempo of Bangladesh’s labour export to different countries in the mid-and long run, cautioned stakeholders concerned.
As the Russia-Ukraine war began, giving the wrong signal to the global economy, industrialists and businessmen in labour importing countries may slow down recruitment of workers on grounds of the high cost of living and possible social unrest, said a leading labour exporter.
Bangladesh exported a total of 1,008,525 workers in 2017, the highest number in one year, during the last 50 years.
Meanwhile, as a response to a question on when the shortage of foreign workers will be resolved as the palm oil sector has recorded losses to the tune of billions of ringgit, Malaysia’s Plantation Industries and Commodities Minister Datuk Zuraida Kamaruddin told the media: “We also ask industry players to be open to accepting workers from India and Pakistan who are ready to work in Malaysia,”
She said sourcing workers from India and Pakistan will be a short-term measure given the problems that Malaysia is facing with Indonesia and Bangladesh in terms of sourcing foreign labour from the two countries.
“We feel that to resolve the problem immediately, we have to bring in these workers to manage the fruits (fresh fruit bunch),” she added.
She said the ministry has also set up a committee to help the industry with their application for foreign workers, according to the Malaysian newspaper.
“We are working together with the Human Resources Ministry. The officials from the ministry will manage the process right from the application to the arrival of the workers from overseas,” she said.
Zuraida conceded that the entry of foreign workers is still slow and is expected to pick up this month.
She said if the system is implemented well, foreign workers who enter the country can be tracked and they cannot switch jobs. Apart from that, Zuraida said the plantation industry has also embarked on automation efforts to reduce dependence on foreign labour.
The Malaysian Palm Oil Association (MPOA) reportedly said that it expects about 52,000 migrant workers to arrive by the end of the year.
Meanwhile, a leader of the Bangladesh Association of International Recruiting Agencies (BAIRA) said that the Bangladesh government should engage in constant talks with different stakeholders in the recruitment of Bangladeshi workers in Malaysia.
According to the Malaysian online newspaper, The Star Online, more than 2,000 Bangladeshi workers will now be available to be hired in Malaysia following the verification process involving 15 companies from Bangladesh.
In a statement, the Human Resources Ministry said the previous technical issues that were delaying the recruitment of Bangladeshi workers into the country have been resolved.
“Interested employers, who have paid the levy and are looking to hire Bangladeshi workers, can send their applications to the Bangladesh High Commission to apply for confirmation of employment and work visa documentation.
“But do keep in mind that the entry of Bangladeshi workers will be subject to standard safety and health screenings.
"This will include compliance with the minimum requirements set by Malaysia’s Immigration Department,” the ministry said.
It added that the verification of the remaining companies from Bangladesh by the Bangladesh High Commission is expected to be completed in the following weeks.
As the labour export gains momentum this year, the government should also devise mid and long-term strategies to send more skilled workers abroad since some closed labour markets are expected to reopen later this year, said Zillur Rahman, former director of the Dhaka Chamber of Commerce and Industry (DCCI) said.
Economies of major Gulf countries and Southeast Asian countries are also getting back on the right track which also helps to get present momentum, opined Rahman
Proper training of Bangladeshi workers is important on some issues to regain labour markets in Qatar and Kuwait, as some young Bangladeshis engage themselves in crime to become rich overnight.
Meanwhile, expressing discontent over the present process of issuing passports among people, BMET Director Gen Md Shahidul Alam at a seminar demanded improvement in the process and reducing harassment of passport seekers.
He also proposed that overseas workers should get passports without harassment and within the shortest possible time.
Ali Haider Chowdhury, former secretary general of BAIRA, told this correspondent that the UAE has opened its labour market to Bangladeshis and the labour export to this Gulf market may reach 50,000 next year.
Bangladesh exported a total of 93 workers to Kuwait in 2021, 1744 workers in 2020, 12,299 in 2019 and 27,637 workers in 2018.  Meanwhile, Bangladesh exported 5,207 workers in 2021, 3,608 workers and 50,292 workers to Qatar.
Bangladesh received a record $22,070.87 million as remittance during 2021 as against $21,752.27 million in 2020, a 1.46% rise in the just concluded year, according to the statistics of BMET.