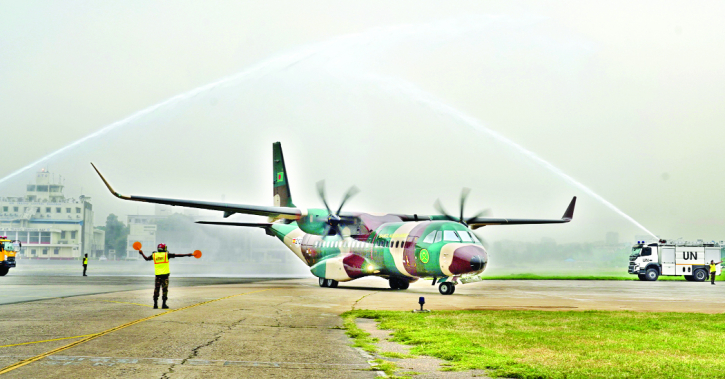 The second CASA-C 295W medium utility military aircraft was added to the fleet of Army Aviation Group of Bangladesh Army today Sunday (25-09-2022) in an informal ceremony. Bangladesh Army Chief General SM Shafiuddin Ahmed was present on the occasion. Also present was the Ambassador of Spain  Francisco de Asis Benitez Salas, senior officers of the Army Headquarters, Air Force, BGB, RAB officers and other invited guests. LThe aircraft manufactured by Airbus Military, Spain took off from Spain and touched down in Bangladesh yesterday afternoon. After necessary operations, the aircraft arrived at Tejgaon Old Airport. The military aircraft was greeted with a water cannon salute. On this occasion, the Chief of Army Staff thanked the Prime Minister for his groundbreaking direction and special interest in the modernization and development of the Bangladesh Army. He expressed his strong position that the Bangladesh Army, a symbol of the nation's trust, is always ready to protect the country's sovereignty at all times.
The addition of a second CASA-C295W medium utility aircraft greatly enhanced the Bangladesh Army's combat capability. This aircraft will be used for landing troops in the battlefield, rapid movement of troops from one place to another, aerial surveillance, cargo transport, VIP missions besides transporting a large number of emergency patients. The aircraft will play an important role in transporting essential relief and medical supplies during natural calamities in the country.