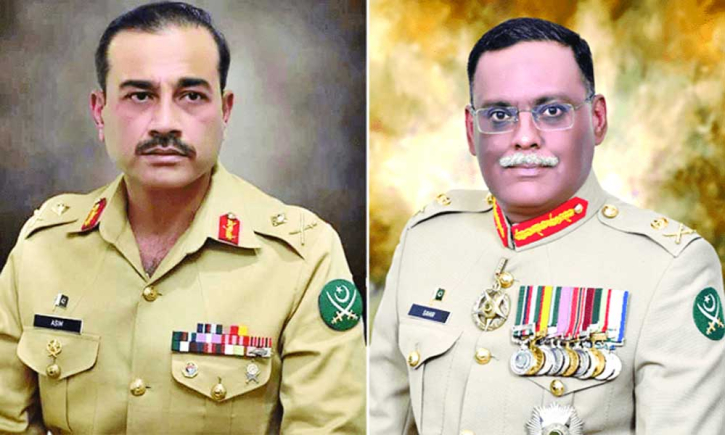 Pakistan Prime Minister Shehbaz Sharif nominating Lt Gen Asim Munir and Lt Gen Sahir Shamshad Mirza as the army chief and Chairman Joint Chiefs of Staff Committee (CJCSC) has been sent to President Arif Alvi for approval.
The appointments were announced earlier yesterday by Information Minister Marriyum Aurangzeb on Twitter - a tweet which was deleted and swiftly put up again - capping weeks of intense speculation on the matter.
In her tweet, Aurangzeb said the premier made the choice while exercising his constitutional authority.
Information minister says summary for appointments has been sent for president's approval.
PTI chief Imran Khan says "I and the president of Pakistan will act according to the Constitution and laws" after the summary is received
The Joint Chiefs of Staff Committee is an inter-services forum that works for coordination among the three armed forces. The CJCSC also serves as the principal military adviser to the prime minister and the National Command Authority.
She went on to say that a summary of the same had been sent to President Arif Alvi.
Speaking to the media minutes after the announcement was made, Defence Minister Khawaja Asif said the matter had been decided according to the law and the Constitution, calling on the nation to refrain from viewing it through a "political lens".
He expressed the hope that the president would not make the appointments "controversial" and would endorse the advice of the premier.
The defence minister reiterated that the president should endorse the premier's advice so that a "controversy may not arise". "This will also help our country and the economy to get on track. Currently, everything is at a standstill."
He expressed the same in a tweet, saying that the advice had been forwarded to the president. He went on to say that it would now be a test for former premier Imran Khan where he could either strengthen the institution responsible for defending the country or make it controversial.

"This is also a test for President Alvi, whether he will follow political advice or the constitutional and legal advice," he said. "As the Supreme Commander of the Armed Forces, it is his duty to protect the country from political conflicts," he said about Alvi.
Meanwhile, PTI's official account quoted Imran Khan as saying "when the summary comes, I and the president of Pakistan will act according to the Constitution and laws".
His statement comes a day after Imran claimed President Alvi would "definitely" consult him as soon as the summary for the appointment of next army chief reaches his office.
"President Alvi will definitely consult me on the summary for the appointment of army chief and take a decision as per the law and Constitution. I am head of the party that Dr Alvi belongs to," he remarked while speaking to journalists at his Zaman Park residence on Wednesday.
After the names were made public, PTI Senator Shibli Faraz said: "It is President Alvi's moral obligation to consult with the party chairman and I believe he should.
"This is not an obstacle. As Imran Khan said earlier, whatever happens will be within the law and Constitution."
Outgoing COAS Qamar Javed Bajwa was originally supposed to retire in 2019. However, his tenure was extended for three years by then-prime minister Imran Khan in Aug 2019, just three months before he was set to retire.
Despite speculation about him seeking another extension, Bajwa had indicated several months ago that he planned to retire this year.
His retirement plan was later confirmed by the Inter-Services Public Relations (ISPR) on at least a couple of occasions and the general had himself in the last few months twice made it clear that he had no intentions to carry on - once during his visit to the United States and then again, while speaking at the National Security Workshop at National Defence University.
The next army chief's appointment is at times mentioned as one of the major subplots in the ongoing political crisis engulfing the country which began earlier this year following the tabling of a no-trust motion against Imran.
Doubts about Bajwa's retirement plan had been so strong that Imran, when faced with the vote of no-confidence, suspected that the political move against him was linked to Gen Bajwa's impending retirement. He had, therefore, offered an indefinite extension to Gen Bajwa in a bid to pre-empt the then opposition's vote against him, as per a recent presser by senior military officials.
Gen Bajwa started his farewell visits to formations on Nov 1 with a visit to the Army Air Defence Command and followed up the next day with a visit to Armed Forces Strategic Forces Command. Since then, he quietly toured a number of formations.
In a farewell address, Gen Bajwa acknowledged that the military received criticism for "unconstitutionally interfering in politics", and at the same time criticised political parties for erring and being intolerant towards rivals.
He also called on political stakeholders to reflect on their attitudes as the "army had started its catharsis" as he emphasised the need for the restoration of political stability.