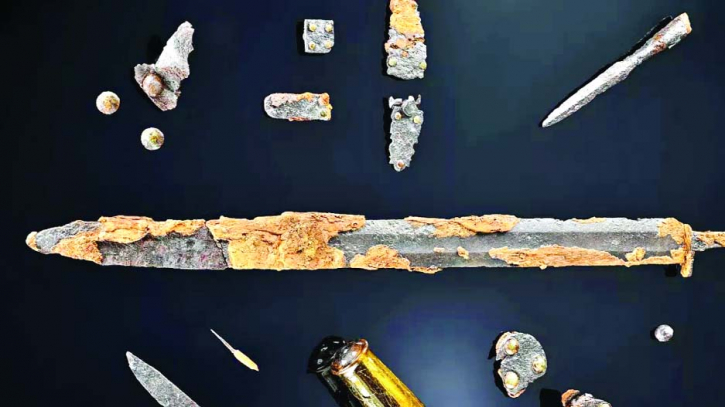 Early medieval weapons and jewelry found in southwestern Germany near the Danube River.
Archaeological treasures, including Stone Age pottery and medieval graves with swords and jewelry, have revealed a long history of human habitation near the Danube River in Germany.
At the site, in the Geisingen-Gutmadingen district of Tuttlingen, in southwestern Germany, archaeologists discovered one grave from the Neolithic, or Stone Age, that dates to the third millennium B.C. and contains distinctive pottery from the Corded Ware culture. They also found 140 early medieval graves, dating to between A.D. 500 and 600, that contain goods including swords, lances, shields, bone combs, drinking glasses and earrings.
"Our Gutmadingen district is probably much older than we previously assumed," Mayor Martin Numberger said in a statement. The district had previously been dated to 1273 based on the first written records of settlement there.
A corded ware pot, rock ax, and flint blade from a Stone Age grave found in southwestern Germany.
The finds were made by a team from archaeology firm ArchaeoTask GmbH in an area near the Danube river where a rainwater retention pond is planned. The Stone Age grave points to the presence of a The Corded Ware people, who are now known mostly for their pottery decorated by geometric lines formed by pressing cord into clay and leaving the impressions to dry. These people were probably pastoralists who kept animals such as cows and sheep, and some also practiced early farming of crops such as barley. Graves from this period are rare in southwestern Germany, according to local officials.
The early medieval graves date to the century after the end of the Western Roman Empire, which fell in 476 A.D. when the German warlord Odoacer deposed the Roman emperor Romulus Augustus. This period is part of what is known as the Migration Period, or the Völkerwanderung, when various tribes in Europe moved around, often conquering one another and pushing each other into new territories. Historians consider this period the transition between antiquity and the early Middle Ages.
In other graves from this period found in Germany, men are often buried with weapons, and women are interred with jewelry and beads. Burial rites sometimes changed as conquerors took over a particular village or region. For example, a Germanic tribe called the Alemanni was defeated by the Franks in A.D. 496 and became absorbed into the Duchy of the Merovingian.
During this transition, the Alemanni began burying the dead of their households together in graves called adelsgrablege (meaning "noble graves"), which also held rich goods, like armor and jewelry. A 2018 study of one of these graves dating to about A.D. 580 to 630 found that the members of the household weren't necessarily related by blood and that adopted members of the family were valued equally to those born or married into it.