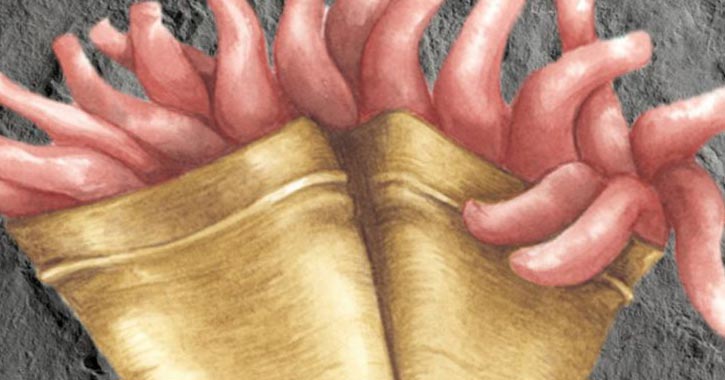 A bizarre, tentacled creature that lived in the deep ocean 560 million years ago resembled a goblet crammed full of wriggling fingers. It may be an ancient relative of modern jellyfish and the earliest known predator in the animal kingdom, analysis of a newly described fossil suggests. More than a decade ago, scientists uncovered a fossil of the purported jellyfish relative in an outcrop of volcanic and sedimentary rocks called the Bradgate Formation in Leicestershire, England. Located in Charnwood Forest, the outcrop formed about 557 million to 562 million years ago, during the Ediacaran period (635 million to 541 million years ago).

This means that the newly identified fossil predates the Cambrian explosion, a 55-million-year episode  in which life on Earth rapidly diversified. During the Cambrian period (541 million to 485.4 million years ago), many animal forms evolved, including arthropod ancestors of insects, spiders and crustaceans; clamlike and hard-shelled brachiopods; and chordates — creatures with a spinal nerve cord.

It's almost unheard of for Precambrian fossils to resemble forms seen in animals alive today, so the discovery of an Ediacaran animal resembling a jellyfish is exceptional, said Philip Donoghue, a professor of palaeobiology at the University of Bristol in England, who was not involved in the study. "They found an animal, a member of a modern group of animals, in the Precambrian, where they're classically not meant to be found," Donoghue told Live Science.  (Although not involved in the new work, Donoghue was formerly the doctoral advisor to several authors on the paper.)

To date, the vast majority of Ediacaran fossils don't share structural features with any living animals, so they're generally thought to belong to extinct animal groups, Donoghue said. "This fossil's probably the oldest one recognized, with quite convincing evidence, to be a member of one of the living phyla," or large groups of related animals, Donoghue said.

The researchers named the newly identified creature Auroralumina attenboroughii and described the animal in a new study, published Monday (July 25) in the journal Nature Ecology & Evolution(opens in new tab). The genus name, Auroralumina, translates to "dawn lantern" in Latin and references the fossil's old age and its torch-like shape. The species name honors broadcaster and biologist Sir David Attenborough for "his work raising awareness of the Ediacaran fossils of Charnwood Forest," the authors wrote in their report.