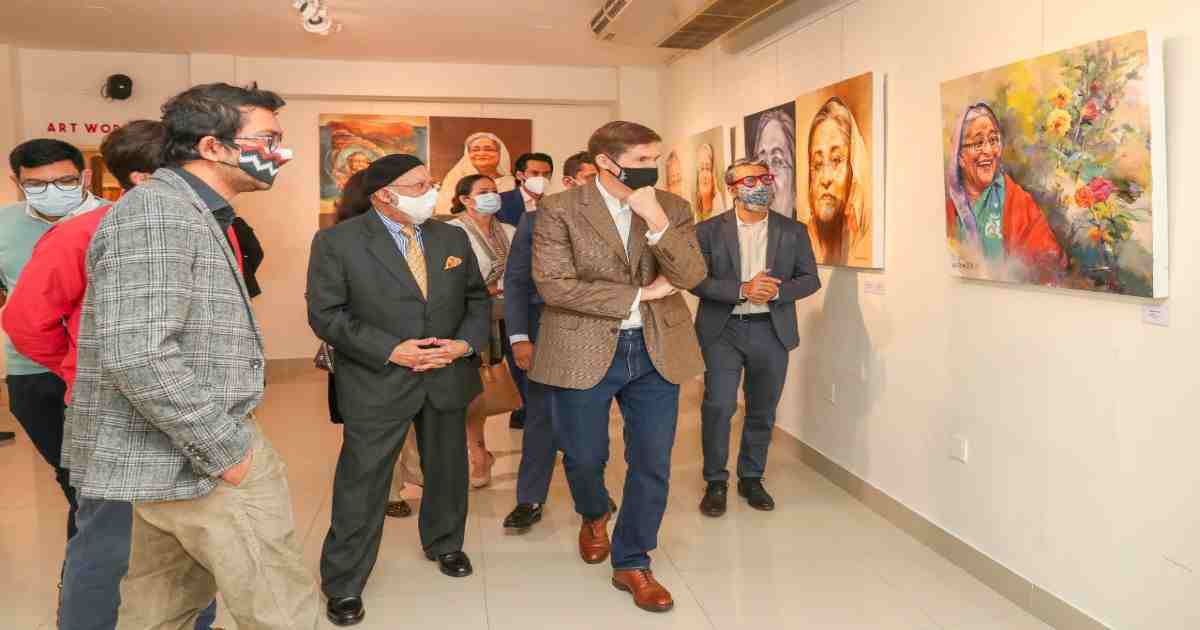 SAT DESK : United States ambassador to Bangladesh Earl Robert Miller on Saturday visited the ongoing two-month long group art exhibition titled Sheikh Hasina: On the Right Side of History and appreciated the artists for taking forward the history of this ‘extraordinary country’.

Deputy managing director of Cosmos Group Masud Jamil Khan, former diplomat Tariq Ahmad Karim, who is currently the director of the Centre for Bay of Bengal Studies at the Independent University and honorary advisor emeritus of Cosmos Foundation, and Julhas Alam, bureau chief of Associated Press, Dhaka, were present at the programme, among others.

Welcoming the US ambassador, Masud Khan said, ‘The US is our true and tested friend. We see our relationship with the US from a long-term and strategic view.’

Masud Khan briefed the ambassador about the art exhibition and said each and every art piece at the exhibition was unique and special in its own way.

‘Art may not be essential to our day-to-day survival but it’ll be in the long run to the survival of society and culture,’Masud Khan said, adding that the exhibition was a part of the year-long programme to celebrate the birth centenary of Sheikh Mujibur Rahman.

Gallery Cosmos, in collaboration with the Cosmos Atelier71, recently hosted an art camp supported by the Cosmos Foundation on prime minister Sheikh Hasina, the eldest daughter of Sheikh Mujib.

The artworks produced at the camp are being showcased at the exhibition. The exhibition will remain open till February 12, 2021 at Cosmos Centre.

The US Ambassador, accompanied by his son Andrew Miller, visited different wings of the Cosmos Group at Cosmos Center, including UNB newsroom and AP office. He thanked the Cosmos Group for the invitation and hospitality.