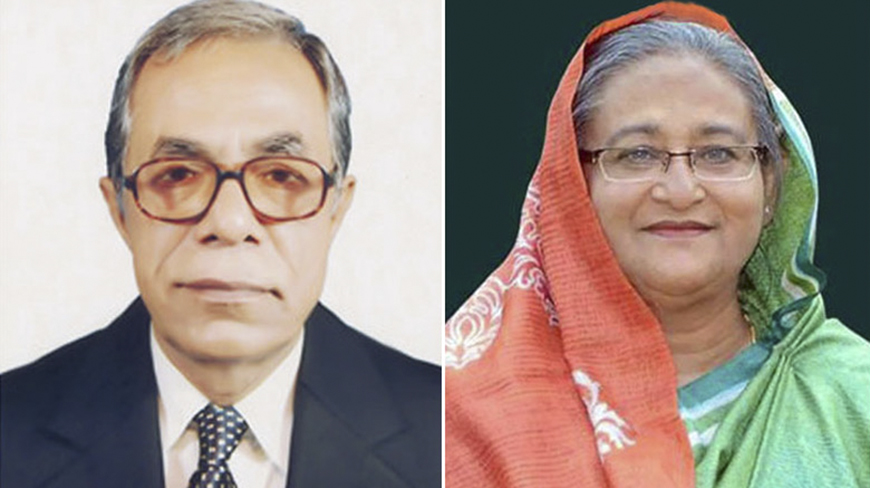 President M Abdul Hamid wished long life, sound health, peace-progress and continued wellbeing of Prime Minister Sheikh Hasina on the occasion of her 75th birthday to be celebrated on Tuesday.

"I extend my heartiest greetings and warm congratulations to Bangladesh Awami League President and Honorable Prime Minister Sheikh Hasina," he said in a message on Monday.

Sheikh Hasina was born on September 28, 1947 at Tungipara in Gopalganj in a traditional political family, the president said.

Since her childhood, she saw the leadership of her father, the undisputed leader of Bangalee nation and the great architect of the independence Father of the Nation Bangabandhu Sheikh Mujibur Rahman, his struggling life and his politics for the country and the masses, he added.

Abdul Hamid said that she actively engaged herself with the politics of Bangladesh Chhatra League and took part in all the struggles and movement for realizing the rights of Bengalis including the anti-Pakistan movement.

Despite being the daughter of the Father of the Nation, her path was never smooth, he said.

He said that Sheikh Hasina`s father Bangabandhu Sheikh Mujibur Rahman and most of his family members were brutally killed by the anti-liberation clique of assassins on the black night of August 15, 1975.

Her mother Sheikh Fazilatunnesa Mujib, brothers Sheikh Kamal, Sheikh Jamal and child Sheikh Russel and many other dear and near ones embraced martyrdom, he added.

Bangabandhu`s two daughters -- Sheikh Hasina and Sheikh Rehana -- escaped the assassination as they were staying in the then West Germany, he mentioned.

The head of the state said they had to spend life in a very adverse situation in exile in London and Delhi for six years keeping the grief of losing parents, brothers and other relatives in heart.

Attacks were carried out on her many times including the grenade attacks on August 21 in 2004 at the Bangabandhu Avenue but every time she escaped these dangers by the grace of Almighty Allah, he said.

He said that PM Hasina was elected president of Bangladesh Awami League unanimously at the national council of the party on February 14-16 in 1981.

Overcoming different hurdles, she returned home on May 17, 1981 and initiated the movement to restore democracy in the country, he said.

In continuation of that, democracy achieved win and the autocrat was overthrown through mass-movement of 90`s, he added.

The president said that Bangladesh Awami League achieved landslide victory in the general election on June 12, 1996 and formed the government under her leadership.

During that period, the historic Chattogram Hill Tract (CHT) Peace Accord was inked while Ganges Water Sharing Treaty was signed with neighboring India, he mentioned.

During that period, the verdict of the case over the murder of Bangabandhu Sheikh Mujibur Rahman was executed, trial process of war criminals began and verdicts were executed, Bangladesh`s legal right in maritime boundary was established, longstanding unresolved land boundary with India was demarcated or agreement for exchanging of enclaves was inked, the president said.

Under her dynamic leadership, Bangladesh today graduated to the status of developing nation from the list of Least Developed Countries (LDCs), he said.

She set a bright example in the history of world humanity by giving shelter to millions of forcibly displaced and persecuted Rohingya people from Myanmar, he said, adding that because of her generosity, Sheikh Hasina has been dubbed as "Mother of Humanity".

In continuation of the successful implementation of Vision 2021, Sheikh Hasina undertook `Vision 2041` and Delta Plan 2100 to turn the country into a `Sonar Bangla` as dreamt by Bangabandhu, he said.

The president said that coronavirus pandemic has pushed the entire world to a severe uncertainty.

Though the world economy faced negative impacts of the pandemic, Bangladesh has been able to keep the economic growth facing the impacts of coronavirus pandemic because of the time-befitting and courageous steps of Prime Minister Sheikh Hasina, he said.

President Hamid said that the government has declared 28 stimulus packages for around Tk1,32,000 crore to keep the wheels of the economy running and keep continued the livelihood of the people who faced losses due to the pandemic.

He said that works are underway to bring all citizens of the country under the coverage of vaccination.

President Hamid said that Sheikh Hasina is a leader of masses as like as her father.

With her political wisdom, prudence, dynamic leadership, humanitarian values, she established herself as one of the best statesmen not only in the country but also in the world, he said.

He said that under her leadership, Bangalee nation is moving ahead to build a happy and prosperous Sonar Bangla as dreamt by Bangabandhu.