â€˜Impact on relations depends on USâ€™ 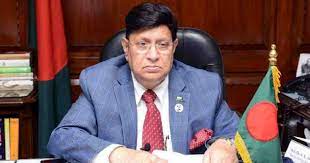 Diplomatic Correspondent
Foreign Minister Dr AK Abdul Momen on Saturday said it will depend on the United States whether there will be any impact on Dhaka-Washington relations following sanctions on RAB and individuals.
“I don’t think so but it depends on the US,” he told reporters after attending a programme at Foreign Service Academy when asked about any possible impact on the relations with the US following this development .
Dr Momen said there are instances of attacks on those countries and governments which have been doing well in terms of development and people’s welfare.
He said problems appear when a country or government does well and there are many examples. “Once you do something for people’s welfare, many out of jealousy do so many things.”
Dr Momen said the people of the country have much confidence in the “disciplined” force RAB as they played a role in making the country free from terrorists.
He said some NGOs and human rights groups lodged complaints against RAB in addition to the US` own assessment. “These’re regrettable.”
In the USA, Dr Momen said, 600,000 people got disappeared every year and the US government does not know how they got disappeared.
Meanwhile, he said, around 1,000 people are killed each year by the police in the USA in the line of duty but no head of agency is punished.
The Foreign Minister said what the US said about RAB is not based on facts. “They should be specific and more fact-based ones. The US is a mature country but their decisions are not that much mature.”
The United States on Friday imposed human rights-related sanctions on Benzir Ahmed, current Inspector General of the Bangladesh Police and former Director General of Bangladesh’s Rapid Action Battalion (RAB) and six other individuals on the occasion of International Human Rights Day.
The US Department of State announced visa restrictions on Benazir Ahmed, which it says, due to his “involvement in gross violations of human rights” making him ineligible for entry into the United States.
RAB as an entity, Benzir Ahmed, and six other officials were designated by the Department of the Treasury under the Global Magnitsky sanctions programme in connection with serious human rights abuse, said the US Department of State.