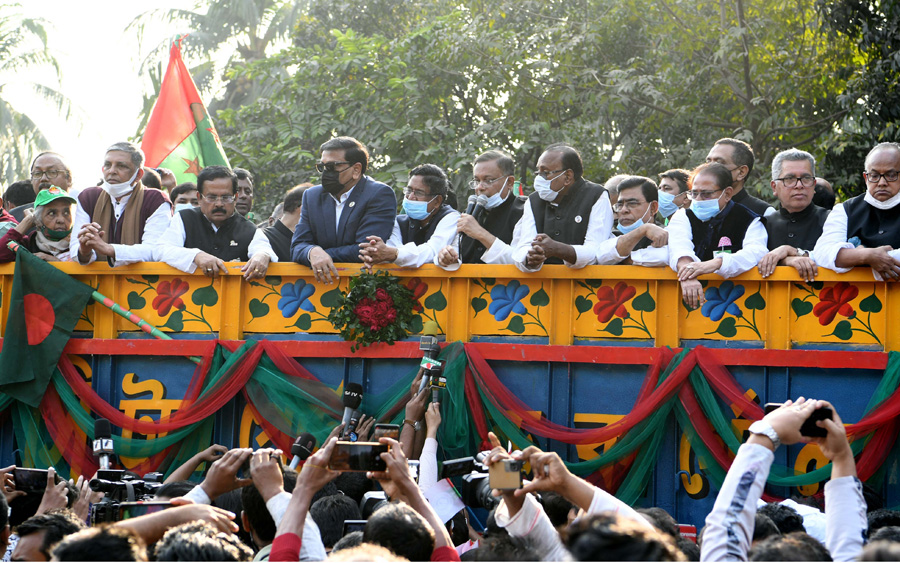 They made the pledge at a brief rally in front of the Institution of Engineers, Bangladesh (IEB) before bringing out a colorful procession marking the country`s golden jubilee of independence and Mujib Barsho.

But the anti-state conspiracies are being hatching both at home and abroad, he said. The AL leaders pledged of marching forward by facing all undemocratic and communal forces politically.

The `Victory Procession` was brought out from in front of the historic Suhrawardy Udyan where Pakistani occupation forces had surrendered to the allied forces on December 16, 1971.

AL leaders and workers from 15 constituencies of the capital city, 41 thanas and over 100 wards joined the procession by marching from their respective areas.

Bangabandhu`s historic March 7 speech and different patriotic songs were played through loudspeakers in the procession.

Clad in red-green t-shirts, cap and traditional sharees, the crowd joined the procession and chanted slogans of the Liberation War.

The procession ended at the Dhanmondi road number 32.

Speaking at the rally, Amu said Bangladesh had attained independence under the leadership of Bangabandhu. But conspiracies were hatched to ruin the country`s independence by assassinating Father of the Nation, he added.

Amu said Bangabandhu had to face imprisonment for nearly 13 and a half years for achieving independence in 1971 within 23 years since the creation of Pakistan in 1947.

Through different movements and struggles, Bangabandhu united the freedom-loving Bangalees to join the Liberation War, he said.

Begum Matia Chowdhury said Bangladesh has marched ahead overcoming all conspiracies and it will go ahead in the coming days too.

"We must build Bangabandhu`s Sonar Bangladesh under the leadership of Prime Minister Sheikh Hasina," she said.

Abdur Razzaque said none will be able to halt the development and progress of Bangladesh by hatching conspiracy. "Bangladesh is going ahead and it will continue going ahead," he said.

Dr Hasan Mahmud said many conspiracies were hatched in the 50 years against Bangladesh, its independence, development and progress. "Overcoming all hurdles and impediments, we are going ahead to materialize the dream of Bangabandhu. Today we are a proud nation," he said.

The information minister said that the evil forces which didn`t want Bangladesh independence are now active both at home and abroad in anti-state conspiracies.

But the country must become a Sonar Bangla as dreamt by Bangabandhu by defeating all evil forces, he hoped.