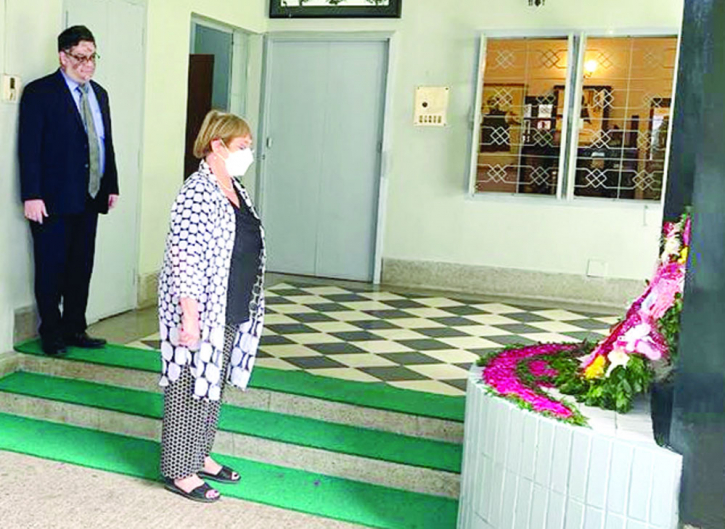 Visiting UN High Commissioner for Human Rights Michelle Bachelet paid homage to Father of the Nation Bangabandhu Sheikh Mujibur Rahman at Bangabandhu Memorial Museum on Monday.
State Minister for Foreign Affairs Md. Shahriar Alam received her at Dhanmondi-32.
The UN rights chief placed a wreath at the portrait of Bangabandhu and signed visitors' book there.
She also took a tour to the whole museum and was briefed by the State Minister.  Bachelet, who was an elected president of Chile on two occasions (2006 – 2010 and 2014 – 2018), is scheduled to meet Prime Minister Sheikh Hasina on Wednesday morning.
Bachelet will also join an interactive session on “New Frontiers of Human Rights: Climate Justice in Perspective” with young scholars at the Bangladesh Institute of International and Strategic Studies on Wednesday after her meeting with PM Hasina.
She held meetings with the Cabinet members of the government including Foreign Minister AK Abdul Momen on Sunday. The top executive of the UN Human Rights body will also have the opportunity to interact with the forcibly displaced Rohingya people during her trip to Cox’s Bazar, through which she would be equipped with concrete information to press hard the agenda for their repatriation to the ancestral homeland - Rakhine State of Myanmar, said the Ministry of Foreign Affairs.
Bachelet will make a statement on Wednesday at the end of her visit, said her office.
She is scheduled to interact with the National Human Rights Commission, youth representatives, leaders of the civil society organizations (CSOs) and the academia during her stay in Dhaka.
Bachelet arrived here on Sunday morning on a four-day visit as Bangladesh continues “constructive dialogue” with her for the promotion and protection of human rights.