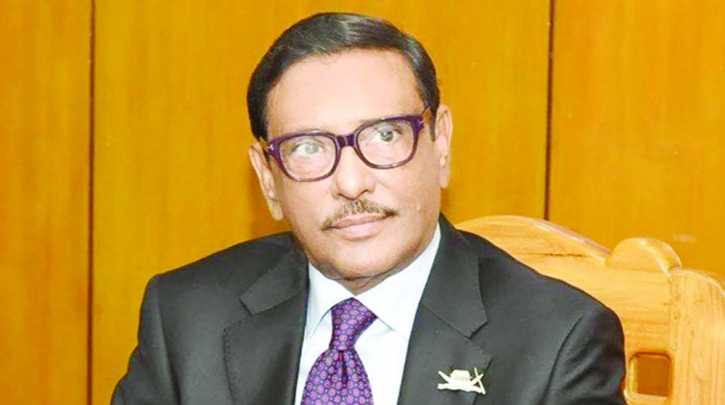 Awami League (AL) General Secretary Obaidul Quader yesterday said the values of the Liberation War and democracy are not safe under BNP regime.
"The country's people are not in any crisis but, in fact, they are in danger because of the BNP," he said in a statement issued protesting the misleading statement of BNP Secretary General Mirza Fakhrul Islam Alamgir.
Claiming that the people think that the biggest threat to the country's independence and sovereignty is the BNP, the AL general secretary said the values of the Liberation War and democracy are not safe under the reign of BNP as the people are worried about what BNP would do against the backdrop of their political bankruptcy.
Responding to a statement of Fakhrul that the country is in a deep crisis, he said the country is not in crisis but the BNP is in a deep crisis.
Quader, also the road transport and bridges minister, said BNP leaders threaten everyday to wage a movement but they do not know who is the leader of their movement.
Mentioning that both BNP chairperson Khaleda Zia and its acting chairman Tarique Rahman were convicted, he said one was convicted for embezzling money of an orphanage.
Bangabandhu's daughter and Prime Minister Sheikh Hasina gave Khaleda Zia the opportunity to receive treatment staying at her home, thanks to the generosity of Sheikh Hasina, the AL general secretary said.
He said another person -Tarique - fled abroad like a coward on undertakings that he would not do politics, while the BNP leader is a fugitive convict in the cases of 10 trucks arms haul and the August 21 grenade attack.
Quader said Tarique has been living a luxurious life staying at a safe distance and throwing sound bombs from there aiming to boost up his leaders and activists, dreaming of the assuming the state power.
The country's people no more want to go back and see the 'blessed son of corruption', founder of Hawa Bhaban and convicted fugitive Tarique Rahman, he said.
The AL general secretary said, the BNP leaders, in their statements, always find the smell of artificial crisis and do the politics of frustration saying that the country's independence is gone.
The BNP should shun the tactics of such ill-politics, he added.
"It will really be supportive for the country's politics if BNP returns to the right path by holding the spirit of the Liberation War and democratic values," Quader said.