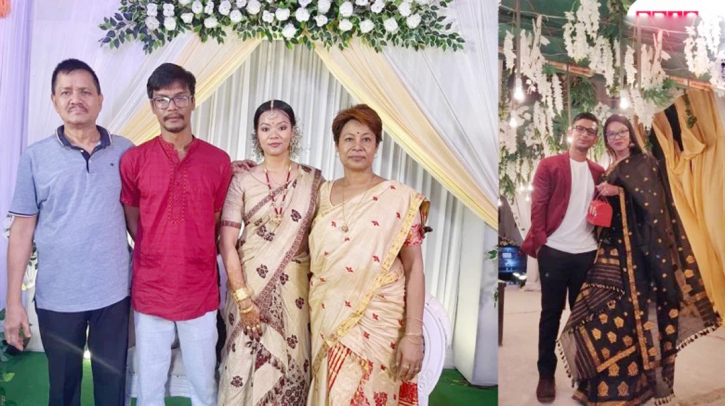 The wedding took place in Jerai village, under the Chabua assembly constituency in Dibrugarh district, Assam, in the presence of the bride and groom's families.

Reportedly, Banya Baruah has married a Bangladeshi youth, namely Anirban Choudhury, who is currently settled in Australia. He is a native of Bangladesh's Comilla District.

This unique love story began when Pro-talk ULFA leader Anup Chetia and his family went into hiding in Bangladesh.

The newlywed couple met while studying at the Mastermind International School in Dhanmondi, Bangladesh.

Meanwhile, the groom's side has also planned a reception ceremony in November 2022 at the ISKCON temple in Melbourne, Australia, in the presence of his family and friends.

It should be noted that Bangladesh handed over Pro-Talk leader Golap Baruah, alias Anup Chetia, to India in 2015. He had been jailed in Bangladesh for 18 years.

After being granted bail in four cases filed against him, he was later released from Guwahati Central Jail.

Chetia has been the main peace negotiator with New Delhi since then.

Chetia and five other leaders, including the ULFA's commander-in-chief Paresh Baruah, who is currently thought to be hiding somewhere in China or Myanmar after fleeing Bangladesh earlier, formed the ULFA in 1979.

Chetia and five other leaders, including the ULFA's commander-in-chief Paresh Baruah, who is currently thought to be hiding somewhere in China or Myanmar after fleeing Bangladesh earlier, formed ULFA in 1979.

Earlier, the ULFA's pro-talks faction expressed their discontent with the delay in peace talks between them and the Centre and requested assistance from the state chief minister. Peace talks between the ULFA pro-talk faction and the government have been delayed for nearly two years. Pragnews