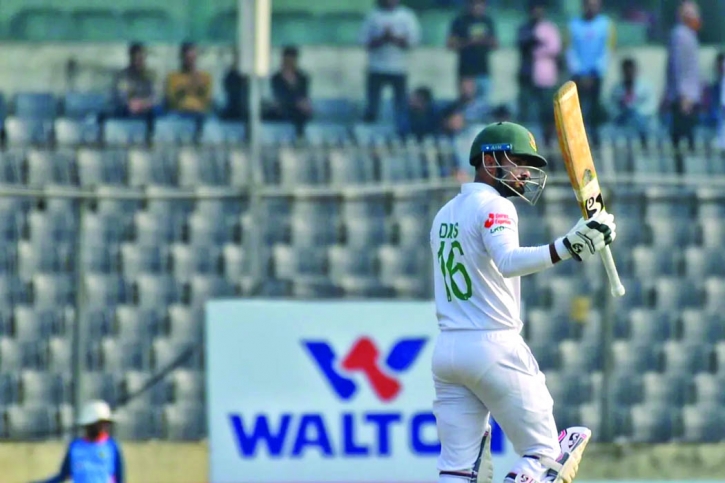 India's pursuit of 145 runs in the last innings of the Dhaka Test proved to be a challenging task as they lost four wickets for just 37 runs on Saturday evening. With six wickets still in hand, India now needs another 100 runs to reach the target.
Cheteshwar Pujara and Virat Kohli, the most experienced batters of India's setup, have been among the big losses for the Indian batting line-up.
Mehidy Hasan Miraz has tested India's top-order batters with his superb spin bowling and has been largely victorious, claiming three out of the four wickets lost by India in their second innings so far, conceding only 12 runs.
Earlier, Bangladesh ended their first innings on 231, with Liton Das scoring the highest of 73. Zakir Hasan also hit a fifty
The hosts started the day with seven without losing any wickets. But in the first session of the day, Bangladesh lost four wickets, Najmul Hossain Shanto, Mominul Haque and Mushfiuqr Rahim failing to offer any challenge to the Indian bowlers.
But Zakir and Liton proved that a little patience would have resulted in a bigger score for the Tigers.
Axar Patel bagged three wickets for India while Ravichandran Ashwin and Mohammad Siraj took two wickets each.
Nurul Hasan Sohan and Taskin Ahmed posted 31 each, helping the hosts to get a lead close to 150.
India will have around 23 overs on the third day. Earlier, India posted 314 in their first innings in reply to Bangladesh’s 227 and secured a first-innings lead of 87 runs.
Rishabh Pant and Shreyas Iyer were India's most successful batters, posting 93 and 87 runs, respectively.