German Air Force can be in Asia in a day 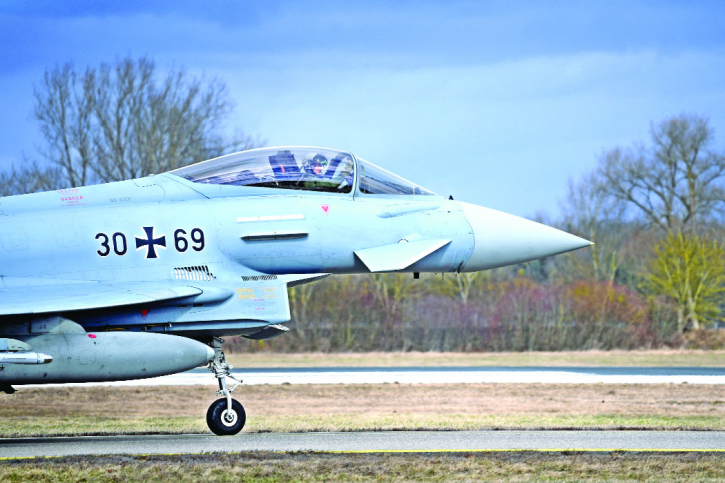 The German Air Force has begun an exercise named Rapid Pacific 2022, sending a fleet of aircraft to the far lands of Asia.
Six Eurofighter jets, four A400M multirole aircraft and three A330 multirole tanker transport planes on Monday took off from Neuburg Air Base, en route to Singapore. The goal was to reach the city-state within 24 hours, which it did, to show that the German Air Force can be in the heart of the Indo-Pacific in a day. From there, the fleet will head to Australia, South Korea and Japan. Fittingly, one Eurofighter was painted with the flags of Germany and the countries the fleet is visiting, to show unity with Germany's Indo-Pacific partners. Why is the Bundeswehr (German Armed Forces) deploying aircraft to the Indo-Pacific for the first time in the post-World War II era?
"We want to show that we stand for multilateralism and the rules-based international order, together with our security partners," a Ministry of Defense spokesperson told Nikkei.
Clearly, China is in mind. Following the deployment of a frigate to East Asia in 2021, this is another political message from Berlin.
It marks a stark change of direction for Germany. The shift was led by the Social Democratic Party (SPD), the champion of pacifism and the new eastern policy, which sought reconciliation with the Communist bloc.
Berlin has learned the harsh lesson of going too deep with authoritarian states. For the half-century since the 1970s, Germany relied on Russia for energy. Those ties are now proving difficult to sever.
In an interview with Nikkei, SDP heavyweight Michael Muller, a former mayor of Berlin, emphasized, "We must ensure that we do not get into new dependencies with China. This is the lesson from the current Russia-Ukraine crisis."
As Germany, which for years pursued a China-heavy Asia policy, distances itself from China, other European countries are accelerating the shift even faster. Sen. Andre Gattolin of France noted that while Russia is the immediate concern, China poses the bigger long-term threat.
Driven by this trend, Europe, which long had been disinterested in the issue of Taiwan, is now ready to side with the U.S. on the contentious topic.
When China reacted angrily to House Speaker Nancy Pelosi's stop in Taiwan and began live-fire drills surrounding the island, Josep Borrell, the EU's foreign policy chief, said the response could not be justified. The French Foreign Ministry also pressed China to respect order.
Faced with the real threat of Russia, European powers have rediscovered the value of the Transatlantic alliance with the U.S. The U.S. has Europe's back when it comes to Russia. Therefore, if the U.S. is confronting China, Europe should back the U.S. too, recent thinking goes. A new determination is rising in Europe.
China's strategy to counter this trend seems to be to propose bilateral talks with individual European countries. Splitting the democratic camp has always been a big part of the authoritarian playbook. Europe, so far, has been swaying and avoiding the punches.
Taiwan sees an opportunity to make inroads. In May, Economic Vice Minister Chen Chern-chyi visited Lithuania for the first vice-ministerial meeting between the two economies and held a business roundtable.
But for the European economy, distancing itself from China is far more complicated than doing so with Russia. European leaders will keep an eye on the quinquennial Chinese Communist Party national congress this autumn, hoping that a more flexible leadership emerges in Beijing. Until then, the plan is to uphold the "One China" policy.
Liz Truss, the British Foreign Secretary running for prime minister, is a known China hawk. Yet, she has declared that she has no intention of visiting Taiwan as prime minister.
In Germany, some pro-Taiwan lawmakers are planning a bipartisan trip to Taiwan.
East Asia has traditionally not been an area of interest for Europe. The lack of experience will inevitably force policymakers to stumble as they try to formulate a China strategy.
Japan and the democracies of Asia find themselves with a golden opportunity to lend a hand to Europe in this endeavor and deepen ties.