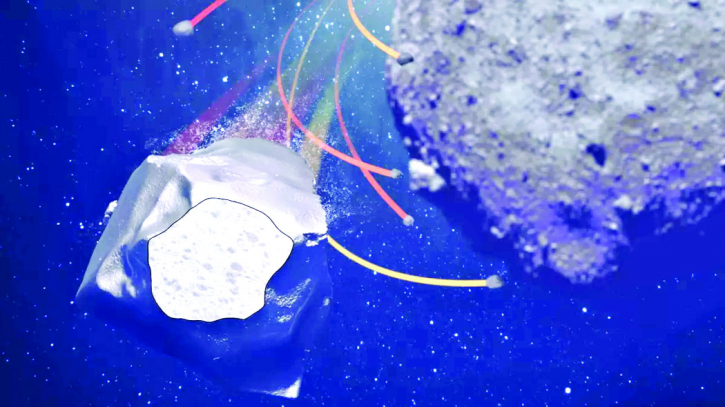 An artist's impression of the popcorning pebbles on the parent body of the Aguas Zarcas meteorite. Small-scale rearrangements may be more important for asteroids than major space collisions.
In 2019, when NASA's OSIRIS-REx spacecraft approached the asteroid Bennu, scientists saw something stunning in the images beamed back to Earth. The surface of the space rock wasn't calm — instead, swarms of marble-sized rocks were popcorning off the asteroid.
Now, a new study of a meteorite that landed on Earth reveals how this asteroid activity occurs. Small collisions can dislodge the pebbles, which shoot off the asteroid but fall back, drawn in by the space rock's gravitational pull. Another collision can then smush the loose pebbles back together, creating a kind of cement of minerals from all around the asteroid's surface.
"It provides a new way of explaining the way that minerals on the surfaces of asteroids get mixed," Xin Yang, a graduate student at the Chicago Field Museum and the University of Chicago and the first author of the new study, said in a statement.
Previously, astronomers thought that asteroids had to undergo dramatic, high-speed, high-pressure collisions to reshape their surfaces, Philipp Heck, the curator of meteoritics at the Field Museum and the study’s senior author, said in the statement.
However, the new study, published Aug. 11 in the journal Nature Astronomy(opens in new tab), indicates that it actually doesn't take much to morph an asteroid. The researchers discovered this when they examined a bit of the Aguas Zarcas meteorite, which fell in Costa Rica in 2019. Fragments of the space rock, which acquired a smooth glassy sheen as a result of the heating it experienced in the atmosphere, hit the roof of a house and a nearby doghouse, according to Arizona State University's Buseck Center for Meteorite Studies.
"We were trying to isolate very tiny minerals from the meteorite by freezing it with liquid nitrogen and thawing it with warm water, to break it up," Yang said. "That works for most meteorites, but this one was kind of weird — we found some compact fragments that wouldn't break apart."
The main mass of the Aguas Zarcas meteorite, which broke up over Costa Rica in 2019.
Instead of forcing the fragments apart, the researchers looked deeper to find out why they were so resilient. Using computed tomography (CT), the scientists were able to peer at the grains, or chondrules, within the tough fragments. In most space rocks, these chondrules are spherical, but in the Aguas Zarcas fragments, they were squished, and all in the same direction. This was a clear sign that the fragments that wouldn't break apart had been impacted.
The 2019 images of Bennu's popcorning surface helped tell the rest of the meteorite’s story. Bennu and Aguas Zarcas are both carbon-rich rocks that formed early in the solar system's history. Therefore,the Aguas Zarcas fragment that hit Earth may have broken off an asteroid very similar to Bennu.
Putting the space- and lab-based observations together, the researchers concluded that the parent asteroid of Aguas Zarcas first underwent a high-speed collision, deforming a part of the rock. This weakened rock gradually broke apart, likely because of the dramatic temperature changes that an asteroid undergoes as it rotates causing the rock to expand, compress, and ultimately fracture. (The side of an asteroid facing the sun can be 300 degrees Fahrenheit (149 degrees Celsius) hotter than the side facing away.)
Something then ejects this broken-up gravel away from the asteroid surface, Heck said. It's not clear whether another collision is necessary, or whether the same thermal stress from uneven heating can do the trick. Either way, the pebbles slowly orbit the asteroid. The gravitational pull of the main asteroid body then gradually causes the pebbles to rain back down onto parts of the surface that never underwent an impact. Finally, the asteroid went through another collision that cemented the impacted fragments and the unimpacted fragments into one rock.
"It basically packed everything together," Heck said. This may have been the impact that broke off the fragment that eventually reached Earth.
While major space rock crashes are rare, scientists now know from observations of Bennu that asteroids often spit off pebbles. These low-level events are probably more important for an asteroid's composition than big collisions, Heck said.