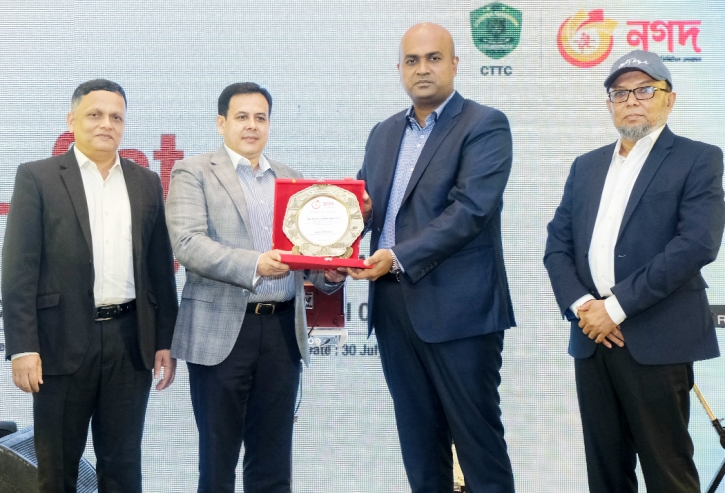 Staff Correspondent
Md. Asaduzzaman, chief of Counter Terrorism and Transnational Crime Unit (CTTC) of Bangladesh Police, stated that Nagad is playing an outstanding role in the country's economic progress. He made this remark during a view exchange meeting between the Postal Department's mobile finance service Nagad and CTTC on Saturday.
The view exchange meeting was held between the top officials of Nagad and CTTC. Md. Asaduzzaman, Additional Commissioner of Police and Chief of CTTC, was the chief guest at the event while Niaz Morshed Elite, Executive Director of Nagad Limited, delivered the opening remarks. The occasion was attended by Lt Col Md Kousar Soukat Ali (retd), Chief External Affairs Officer) of Nagad, Md. Mahbub Alam, PPM, DIG (Retd.), Head Stakeholder Management of Nagad. In addition to CTTC, the event was also attended by Deputy Police Commissioner Mohammad Shahidullah, BPM-PPM, Deputy Police Commissioner Abdul Mannan, BPM(Bar), Deputy Police Commissioner Muhammad Habibun Nabi Anisur Rashid, and deputy police commissioner Mishuk Chakma BPM-Seba among others.
Md. Asaduzzaman, the CTTC chief, stated, "Nagad is playing an incredible role in the economic growth of Bangladesh. Since its commencement in 2019, the organization has made significant progress in a very short period of time. Their progress is unique. As the charges are low and sending money is free, they are advancing rapidly."
Regarding the prevention of digital fraud, Md. Asaduzzaman stated, "Stability in law and order is essential for economic growth. And so, CTTC is working actively. As digitalization expands, scammers gain strength.
However, at CTTC we are strengthening ourselves. These fraudsters will not escape the attention of our expert officers. We have been consistently clamping down on such individuals and we anticipate additional collaboration from Nagad in this regard."
Regarding the establishment of Nagad's digital bank, he said "Digital bank will propel us ahead. I congratulate Nagad in advance on its plan to launch a digital bank."
In his speech, Niaz Morshed Elite, the Executive Director of Nagad, said "65 percent of Bangladeshis were previously excluded from financial inclusion. Since the inception of Nagad, the rate has reduced to 50 percent. According to statistics, Nagad is playing a significant role in bringing the underprivileged population of the country into financial inclusion. Nagad has already grown into a massive family of 6.5 crore customers. We now want to move towards further digitization of the economy."
"The faster we digitize economic operation; the more digital crimes are there. CTTC is doing an exceptional job to prevent them. We appreciate CTTC's proactive stance against all the crimes." He added
The vote of thanks was given by Lt Col Md Kousar Soukat Ali (retd), Chief of External Affairs Officer. Zahidul Islam Sajal, Head of Public Communications of Nagad conducted the program.
At the end of the view exchange meeting, a fascinating cultural program was held. In addition to Anupama Mukti, music was performed by Additional Deputy Police Commissioner (CTTC) Md Tauhidul Islam, and Additional Deputy Police Commissioner Md Zahidul Islam Shohag.