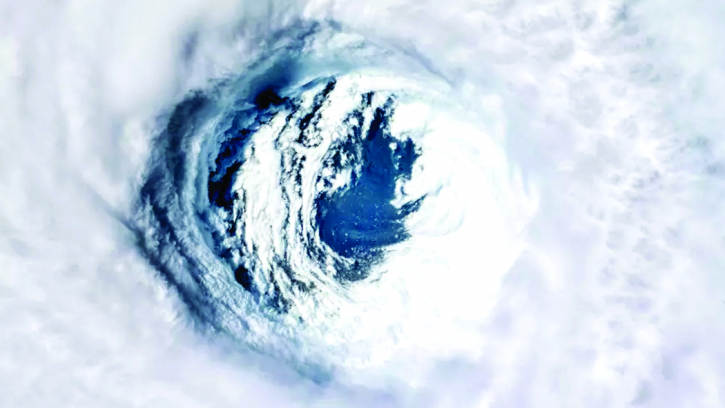 Humans aren't just making Earth warmer, they are making the climate chaotic, a stark new study suggests.
The new research, which was posted April 21 to the preprint database arXiv(opens in new tab), draws a broad and general picture of the full potential impact of human activity on the climate. And the picture isn't pretty.
While the study doesn't present a complete simulation of a climate model, it does paint a broad sketch of where we're heading if we don't curtail climate change and our unchecked use of fossil fuels, according to the study authors, scientists in the Department of Physics and Astronomy at the University of Porto in Portugal. "The implications of climate change are well known (droughts, heat waves, extreme phenomena, etc)," study researcher Orfeu Bertolami told Live Science in an email. "If the Earth System gets into the region of chaotic behavior, we will lose all hope of somehow fixing the problem."
Earth periodically experiences massive changes in climate patterns, going from one stable equilibrium to another. These shifts are usually driven by external factors like changes in Earth's orbit or a massive surge in volcanic activity. But past research suggests we are now entering a new phase, one driven by human activity. As humans pump more carbon into the atmosphere, we are creating a new Anthropocene era, a period of human-influenced climate systems, something our planet has never experienced before.
In the new study, researchers modeled the introduction of the Anthropocene as a phase transition. Most people are familiar with phase transitions in materials, for instance when an ice cube changes phase from a solid to a liquid by melting into water, or when water evaporates into a gas. But phase transitions also occur in other systems. In this case, the system is Earth's climate. A given climate provides for regular and predictable seasons and weather, and a phase transition in the climate leads to a new pattern of seasons and weather. When the climate goes through a phase transition, this means that Earth is experiencing a sudden and rapid change in patterns.
If human activity is driving a phase transition in Earth's climate, that means we are causing the planet to develop a new set of weather patterns. What those patterns will look like is one of the most pressing problems of climate science.
Where is Earth's climate headed? That depends significantly on exactly what our activity is over the next few decades. Drastically reducing carbon output, for example, would lead to different outcomes than changing nothing at all, the researchers wrote in the study.
To account for the different trajectories and choices that humanity could make, the researchers employed a mathematical tool called a logistic map. The logistic map is great at describing situations where some variable — such as the amount of carbon in the atmosphere — can grow but naturally reaches a limit. For example, scientists often use the logistic map to describe animal populations: Animals can keep giving birth, increasing their numbers, but they reach a limit when they consume all the food in their environment (or their predators get too hungry and consume them).
Related: The 5 mass extinction events that shaped the history of Earth
Our influence on the environment is definitely growing, and it has been for over a century. But it will naturally reach a limit, according to the researchers. For example, the human population can only grow so large and can only have so many carbon-emitting activities; and pollution will eventually degrade the environment. At some point in the future, carbon output will reach a maximum limit, and the researchers found that a logistic map can capture the future trajectory of that carbon output very well.
The researchers explored different ways that the human logistic map could evolve, depending on a variety of factors like our population, introduction of carbon reduction strategies and better, more efficient technologies. Once they found how human carbon output would evolve with time, they used that to examine how Earth's climate would evolve through the human-driven phase transition.
In the best cases, once humanity reaches the limit of carbon output, Earth's climate stabilizes at a new, higher average temperature. This higher temperature is overall bad for humans, because it still leads to higher sea levels and more extreme weather events. But at least it's stable: The Anthropocene looks like previous climate ages, only warmer, and it will still have regular and repeatable weather patterns.
But in the worst cases, the researchers found that Earth's climate leads to chaos. True, mathematical chaos. In a chaotic system, there is no equilibrium and no repeatable patterns. A chaotic climate would have seasons that change wildly from decade to decade (or even year to year). Some years would experience sudden flashes of extreme weather, while others would be completely quiet. Even the average Earth temperature may fluctuate wildly, swinging from cooler to hotter periods in relatively short periods of time. It would become utterly impossible to determine in what direction Earth's climate is headed.
"A chaotic behavior means that it will be impossible to predict the behavior of Earth System in the future even if we know with great certainty its present state," Bertolami said. "It will mean that any capability to control and to drive the Earth System towards an equilibrium state that favors the habitability of the biosphere will be lost."
Most concerning, the researchers found that above a certain critical threshold temperature for Earth's atmosphere, a feedback cycle can kick in where a chaotic result would become unavoidable. There are some signs that we may have already passed that tipping point, but it's not too late to avert climate disaster.