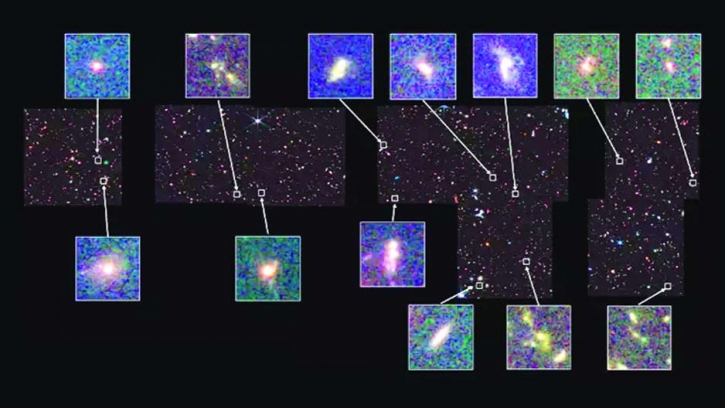 This image — a mosaic of 690 individual frames taken with the Near Infrared Camera on the James Webb Space Telescope — covers an area of sky about eight times as large as Webb’s First Deep Field Image released on July 12, 2022. It’s from a patch of sky near the handle of the Big Dipper. This is one of the first images obtained by the Cosmic Evolution Early Release Science Survey collaboration. It contains several examples of high-redshift galaxies with various morphologies.
The James Webb Space Telescope is changing our understanding of the cosmos.
Galaxies in the early days of the universe were much more varied and mature than previously thought, according to a new study of observations of hundreds of galaxies by NASA's James Webb Space Telescope (JWST).
The Cosmic Evolution Early Release Science (CEERS) Survey has been using JWST to look far back in time, studying galaxies as they were around 11 to 13 billion years ago.
The images of faint, highly redshifted galaxies returned by JWST are much sharper than similar photos captured by the Hubble Space Telescope. These new images have revealed the presence of mature features such as disks and spheroidal components, Jeyhan Kartaltepe, an associate professor in the Rochester Institute of Technology's School of Physics and Astronomy, said in a statement.
"This means that, even at these high redshifts, galaxies were already fairly evolved and had a wide range of structures," said Kartaltepe, lead author of the new paper and a CEERS co-investigator.
These early galaxies were therefore much more like the galaxies of the present than previously known.
"This tells us that we don't yet know when the earliest galaxy structures formed," said Kartaltepe. "We're not yet seeing the very first galaxies with disks. We'll have to examine a lot more galaxies at even higher redshifts to really quantify at what point in time features like disks were able to form."