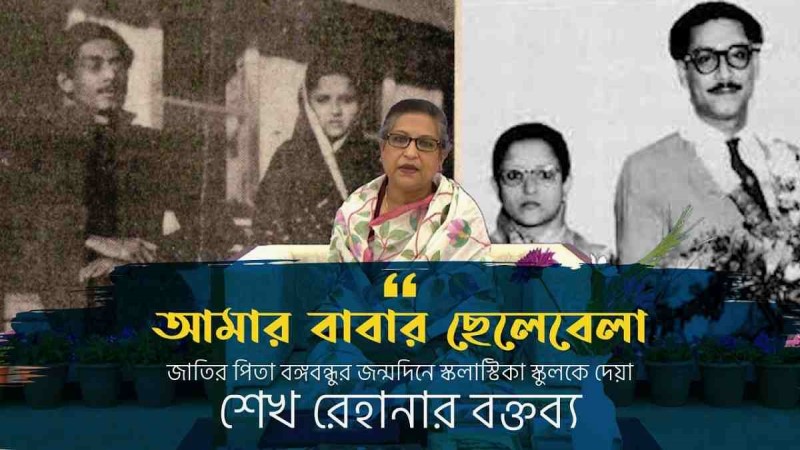 SAT DESK : On the occasion of the 101st birthday of the Father of the Nation Bangabandhu Sheikh Mujibur Rahman, his daughter Sheikh Rehana narrated to children how Mujib reached out to poor and helpless people.

She captured the imagination of children by telling the tales of his childhood in which mischief and prank were pitted against humanity and compassion.

“My grandparents, aunt, mother, and my father himself told those stories to me and the Unfinished Memoirs written by father revealed some others," Rehana said.

As it appears, the mellifluous tune of Azan, the lapping of the Modhumoti River, and the birds singing in the sky rang in the birth of this child, she said.

"The entire village went through a festive mood the villagers were treated to sweet, clothes donated to poor men and women, and religious rituals were also performed as well,” she added.

At a ceremony organized at the capital’s Scholastica School paying a tribute to Bangabandhu, his younger daughter shared the vignettes and anecdotes in the turns and twists of his political life.

Born in Tungipara of Gopalganj on March 17 in 1920, Bangabandhu ended up being the architect of the independence of Bangladesh, paving the path for the country’s presence on the global map.

Raised in a large family, the child was picked up with love and care in the laps of one or another and thus he was growing with bliss.

“He was the gem that everyone loved to see. His two elder sisters cuddled him almost around the clock. He grew up little by little and started learning Bangla, English, Persian, and Mathematics. His initiation in education was through my grandfather,” she went on saying.

Rehana said her father was a bit different and elderly people in their house, teachers, peasants, boatmen, and everyone else admitted this without any reservation that this kid stood out from his peers.

"This boy had a big heart and could reach out to anyone who needed help. Some of his feats such as taking off own shirt to donate it to someone else and sharing food with everyone earned reverence and blessing from the people around him.”

Rehana said little Mujib was curious about everything, asking one question after another to his father, who also answered all his queries. He used to read out the stories of legends, religion, and science to him.

"My grandfather and father Mujib were like friends. While they could share everything without any reservation, their relationship didn’t miss out on mutual respect. My grandfather never resisted his child from undertaking any feat.”

Once a natural disaster wreaked havoc on the grains in his region. People were about to die of hunger, which little Mujib couldn’t stand. Requesting my grandparents, he started donating rice from our barn.

"Along with his little friends, he used to collect rice from door to door and donated that to the people in need," she said.

"Once my grandfather returned from Kolkata with a beautiful shawl for Mujib. Clad in that shawl, Mujib went out. After a while, he was coming back and spotted a weak old man shivering in freezing cold under a tree. Mujib took off his shawl and donated it to him. Then he came back home shivering."

Mujib underwent an operation on his eye in his childhood as he had been suffering from eyesight issues.

The story of how he had to carry it to his dislike also came alive through the story narrated by his daughter.

“My grandfather used to buy a lot of books. He used to read out history, geography, English, Bangla, religion, science, literature, the stories about legends and the repression committed by the British regime to his child," Rehana said.

Mujib was admitted to a missionary school when he came to Gopalganj from Tungipara. He lived in Gopalganj town.

“The beautiful boy with spectacles in his eyes didn’t take time to be in good humor with his friends. As he was older than his peers, they used to call him ‘Miabhai’ or ‘bhaijan’ (a term used to address elder brother).

“This teenage boy had a wonderful characteristic. He could mingle with people of any caste and creed with ease. Whoever got in touch with him became a fan of him. He was like a magnet that could attract everyone around him.”

Sheikh Rehana also narrated how young Mujib along with school teachers and students went from door to door to collect rice and then donated that among starving people.

She said young Mujib was then a popular name in Gopalganj. With his rising popularity came some hurdles as well. Some students and people became envious of him.

"They started telling negative things about him to my grandfather. Sheikh Lutfur Rahman had an unwavering faith in his child. He certainly knew of one or two mischievous acts of his child and believed strongly that his kid couldn’t do anything unjust. If my grandfather inquired about any wrongdoing, Mujib admitted that lowering his head.”

Young Mujib’s world was colorful with sports, humanitarian activities, and all these. There was an organization called Brotochari that was vibrant with songs and dances.

"Playing a Dhole (a traditional percussion of this land), they used to sing and dance to narrate the plight and sorrow of men and women. Mujib joined this group as well. That helped the youths stay physically fit and the stories of human plight and sufferings were narrated to people as well.”

Once there was a football competition between students and government employees where Sheikh Mujib was the captain of the team of students against the team of his father!

Sheikh Rehana also shared the stories of Mujib’s entry into the political arena.

In 1938, Huseyn Shaheed Suhrawardy and Sher-e-Bangla A K Fazlul Huq went to Gopalganj.

While coming back at the end of the programme, Suhrawardy scribbled down Mujib’s name and address and gave his Kolkata address.

“While returning, Suhrawardy said, “Mujib, form an organization here with Muslim children under the name of Muslim Parishad.” Mujib was on cloud nine hearing this as if he heard exactly what he wanted to hear. That was his initiation in the political life and that too through someone like Suhrawardy!”

That dreamy world of dauntlessness called it a day and he tied the knot with Fazilatunnesa Renu.

Talking about the stories of her parents, Rehana said, “Mujib’s best friend was Renu. There was nothing in this world that these two friends couldn’t share. They also bid farewell to the world at the same time.”

While talking about Bangabandhu’s assassination to the children, Sheikh Rehana compared it with a cartoon.

On August 15, 1975, Bangabandhu Sheikh Mujibur Rahman was assassinated along with his entire family. At that time Sheikh Hasina and Sheikh Rehana escaped death as they were abroad at the time of the notorious assassination of history.