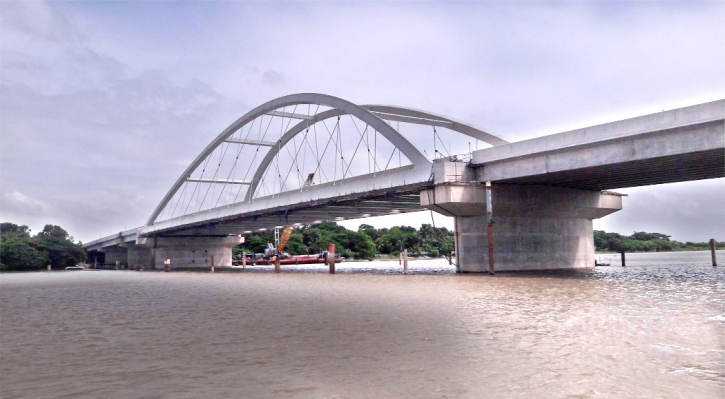 After the dream 'Padma Bridge', another dream comes true for Southwesterners.  Now the country's first six-lane Kalna Bridge is awaiting inauguration. After the completion of the main work of the bridge, now some minor works are going on. Beautification work is going on with the lighting. The bridge is being fully prepared for vehicular traffic by August 30. However, the date of inauguration will be finalized only when the date will be announced by the Prime Minister. Crores of people along with the bridge authorities in Gopalganj are waiting for that. Kalna Bridge has been constructed with funding from the Japan International Cooperation Agency (JICA) under the Cross Border Road Network Improvement Project of the Department of Roads and Highways.
Meanwhile, due to non-operation of Kalna Bridge, the people of Narail, Jessore, Magura,  Benapole, Noapara, Bhomra land port of Satkhira and some surrounding districts are not getting direct benefits of Padma Bridge. Because, coming to Kalnaghat, all kinds of vehicles have to face the irony of ferry crossing. So everyone in this region is waiting for the opening of Kalna Bridge.
Locals including the bridge authorities said that Narail's Kalnaghat and  Shankar Pasha of Gopalganj district is being connected by country's first ever Kalna Bridge under which mighty river Madhumati is flowing. Kalna Setu will be opened for vehicular traffic in the first week of September after approval from the Prime Minister.
Ashrafuzzaman, Project Manager of Kalna Bridge and Executive Engineer of Roads and Highways Directorate (SOAZ) Narail said, Kalna is the first six-lane bridge in the country. It is a Nelson Low Arch type (curved like a bow) bridge. The length of the bridge is 690 meters and the width is 27.1 meters. The six-lane connecting road on both sides is about 4 and half kilometers. The total cost of construction of the bridge is about Tk 960 crore. It is located on the Asian Highway. In terms of road communication, it will play a direct role through Sylhet's Tamabil to Dhaka, Bhanga, Narail, Jessore, Benapole, Kolkata. If Kalna Bridge is opened, it will play a role not only in the national field but also in the international field. With the launch of EPZ (Export Processing Zone) at Lohagara in Narail, expansion of business and massive employment will be created.
It is known from the name plaque installed at Kalnaghat that Prime Minister Sheikh Hasina laid the foundation stone of 'Kalna Setu' on January 24, 2015. Distance from Kalnaghat to Dhaka is only 108 km. As a result, the road connectivity between Dhaka and the surrounding areas including Narail, Benapole, Jessore, Khulna will be reduced by 100 km in some places and 200 km in some places. However, although 'express way' has been constructed from Dhaka to Bhanga in Faridpur, no such road has been constructed from Bhanga to Benapole. As a result, a large part of the south-western region is not getting the benefits of the 'express way'. Two lane road from Bhanga to Narail-Jeshore-Benapole is currently operational. Ashrafuzzaman, project manager of Kalna Bridge, said that the construction of the expressway road in this part is under the project. He said that if the Kalna Bridge is opened, the traffic pressure will increase. So for the time being initiative has been taken to widen 52 km road from Manihar cinema hall square in Jessore to Kalnaghat in Narail. At present the road is 18 feet wide but it will be increased to 24 feet. Tender work is in final stage. If the tender is approved, I will give the work order within two weeks. Road widening will be done at a cost of about 47 crores in Narail section and 32 crores in Jessore section. The work will be completed within one year. For this purpose, tree felling work has started on both sides of the road.
Advocate Fariduzzaman Farhad said, these two bridges (Padma and Kalna) will play a major role in connecting the southwestern region with the capital Dhaka. It will be easier for passengers as well as marketing products.
Besides, industrial factories will be developed in Padma and Kalnaghat areas. Massive employment will be created.