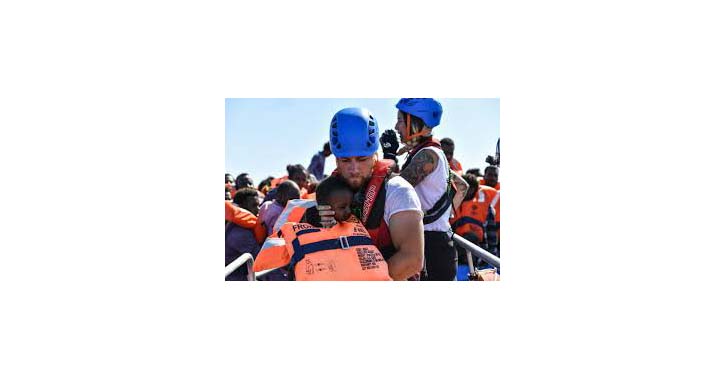 Geo Barents Ship, Mediterranean Sea - It was Wednesday, May 11, 2022, and a small fishing boat drifted in the Mediterranean, some 240km (155 miles) south of the coast of Malta. On board, the 29 passengers - all without life jackets or supplies - faced their third night on the open sea.

Before the small fibreglass boat had set off from Sabratah, Libya, about 200km (120 miles) away, smugglers had handed a satellite phone with GPS to one of the passengers - the young, enterprising and charismatic Jay*, who they chose to pilot the vessel because of his previous boat-handling experience.

The boat slowly moved north, towards Malta’s search and rescue region (SRR), until Wednesday evening, when the passengers were safely out of the Libyan SRR, where, if they were found by the Libyan Coast Guard, they would be returned to Libya.

Just before 9pm, Jay took out the satellite phone and called Alarm Phone - a charitable organisation monitoring distress calls in the Mediterranean - which then relayed the call to the local Maritime Rescue Coordination Centre (MRCC) of Malta - RCC Malta - and to the MRCC in Rome as well as to non-governmental search and rescue (SAR) ships operating in the area.

Shortly after, shrouded in darkness, the passengers - among them a dozen minors and two women - noticed the lights of a ship on the horizon behind them.

Half the passengers were hopeful the ship would take them to Europe, while others worried it was the Libyan Coast Guard.

Every year, thousands of migrants and refugees depart from Libya, attempting to reach Europe in unseaworthy vessels. Last year, Frontex detections of what it calls “illegal border crossings” were at their highest since 2017, and attempts from January to May this year were 15 percent higher than during the same period in 2021, with the journeys across the Mediterranean becoming increasingly fatal, and around half being intercepted by authorities who return the refugees and migrants to Libya.

The passengers on the small fibreglass boat knew the odds of succeeding, as they sat watching the lights of the ship in the distance. They hoped to be rescued but were also terrified of being returned to Libya, so they spent the next few hours trying to outrun the ship. Finally, they agreed on a different plan: to circle around and identify their pursuer from behind.

A few miles behind the small fibreglass boat in the Maltese SRR, the Geo Barents - a 77-metre long SAR ship operated by Doctors Without Borders (Medecins Sans Frontieres, or MSF) - was receiving the last of the survivors from a wooden vessel it had found in distress.

Over the preceding 60 hours, the rescue team had brought on board more than 440 survivors from six separate casualty vessels.

The ship’s heavy-duty cranes hadn't yet hauled in the two orange, two-tonne rescue boats from the water when the exhausted team received the alert from Alarm Phone at 9.38pm informing them about a small fibreglass boat a few miles from their location.

It should have been less than an hour away, had the little boat not been running from them.

By 1am on Thursday, the ship was finally close enough to the fibreglass boat for Leo Southall, the 25-year-old deputy SAR leader who coordinates rescues on the water, to scramble his team: “MSF Team. MSF Team. Ready for Rescue. Ready for Rescue.''

Southall’s usual youthful vigour had slowed slightly from the exertions of the previous rescues, as he rushed up the steps of the ship - dressed in blue surgical scrub trousers and a white long-sleeved T-shirt - past the survivors resting on one of the men’s decks, where sleeping bodies filled every inch of floor space.

For a brief moment, sleep deprivation seemed to slow Southall down; his foot hovered between his boots and waterproof trousers, working out which to put on first. He chose the boots and then corrected himself.

At the same time, the marine crewmen prepared to launch the two fast rescue boats - named Mike and Orca - from each side of the ship.

Southall usually works on Orca with a driver, Minka*, a tall 31-year-old experienced German SAR technician with a long dreadlock running down her back; translator and crewmember, Nejma Banks, a 45-year-old Algerian-American mother of four; and crewman Gabriel Bouza, his first time working for MSF.

The team of nine circled around him, their helmets denoting their roles on the team: white for SAR team members, green for medics, and red for Southall, as team leader on the water.

Another three SAR technicians and a medic worked on Mike and two technicians, led by Miriam Willis, remained on board to transfer people and equipment to and from the ship.

Southall spoke loudly over the noise of the engine and the waves hitting the bulk of the ship. His message to his team was quick and concise, efficiently detailing the specs of the boat in distress, the number of survivors to expect and a possible location.