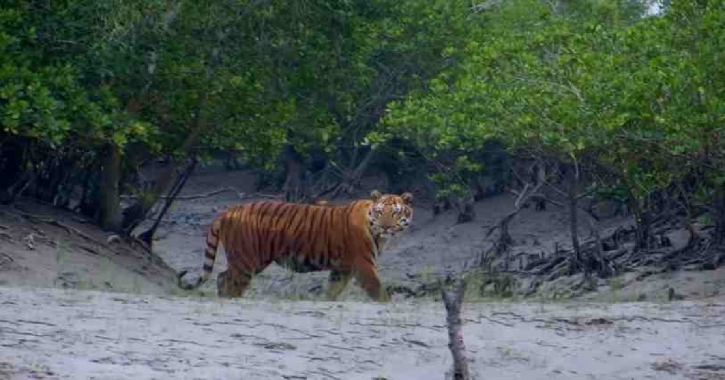 Due to different barriers to free movement of tigers in the Sundarbans, inbreeding occurs among a small population - compromising the genetic diversity of these big cats which eventually results in diseased and weak cubs.
Chief conservator of Forest Department Md Amir Hossain Chowdhury said, “Big rivers like Shibsa, Poshur, and Pangashia are dividing the Bengal tiger into small populations, which result in inbreeding. Inbreeding among tigers with similar genes increases the morbidity and mortality rate of the tigers.”

Transferring of the tigers from one population to another inside the Sundarbans can increase their genetic variety, possibility to survive and as a result the number of tigers will rise, he added.

Amid the growing concern over extinction facing the tiger, 13 tiger-populated countries including Bangladesh are celebrating International Tiger Day 2022 on Friday with different programmes to create awareness.

This year’s slogan for the day is "Tiger is our pride, everyone's responsibility to protect”.

According to Sundarbans East Forest Department the tiger population may increase in Bangladesh part of Sundarbans in this year’s census, which is good news for environmentalists and animal lovers across the globe.

According to a survey conducted in 2018 by camera trapping, there were 114 tigers.

According to the Forest Department, from 2001 to 2021, about 49 tigers died in the Sundarbans. Of them, 22 tigers died in Sundarban's eastern division and 16 in western division. Besides, members of law enforcement forces recovered 11 tiger skins and body parts from different areas.

After 2017-18 no tiger census was conducted in the forest which is the only habitat of Royal Bengal Tigers in Bangladesh.

A project called ‘Sundarbans Tiger Conservation' was approved in March this year by the government but it has not been funded yet, said chief conservator Md Amir Hossain Chowdhury.

The top forest official said that the work of counting tigers in Sundarbans may start in the next winter season subject to the availability of funds.

Research has shown that the Sundarbans have the capacity to habitat 200 tigers, said Mihir Kumar Do, Forest Conservator of Khulna region.

He said the forest department is implementing various initiatives to increase the number of tigers from the present number.

“In order to ensure unimpeded breeding of all kinds of wildlife including tigers, the entry of tourists and fishermen into the Sundarbans have been prohibited during the three months of June, July and August,” he added.

“Recently, tourists and forest staff have spotted tigers of different sizes in various parts of the Sundarbans. At the same time, tiger footprints have been observed in different areas of the forest, suggesting an increase in the number of tigers in the Sundarbans,” said Md Belayet Hossain, divisional forest officer (DFO-east) of the Sundarbans.

The activity of robbers in the Sundarbans has declined in the past few years as they have surrendered to law enforcers and returned to normal life.

Along with that the activity of poachers also decreased. The forest department in Sundarban claims that due to these improvements the tiger population in the Sundarbans is very protected and their wandering area is also safe now.

DFO Belayet Hossain said apart from the regular operations, Smart Patrol is being conducted in the Sundarbans to stop the activities of tiger poachers. Along with the Forest Department, CMC, CPG and BTRC regularly patrol the Sundarbans boundary area, he said.